Paddington Station is situated in the northwestern part of central London, just north of Hyde Park and about 1km from Oxford Street.

If you are flying into London Heathrow, Paddington is significant as it is the central London Terminus of the Paddington Heathrow Express and TFL Rail Heathrow train services. These trains are the most comfortable and speedy way to transfer into London.

Paddington is not the largest of London's mainline stations, it sits about 7th in terms of passenger numbers handled. This still amounts to an impressive 30 million people passing through every year. 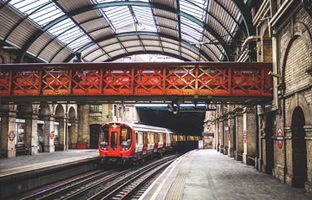 Paddington train station also provides a gateway for independent day trips to some of the main tourist attractions outside London, notably Windsor, Bath and Oxford.

Paddington has 14 terminal platforms, numbered 1 to 14. Trains are split between the Heathrow trains, the long-distance inter-city trains and suburban commuter lines. The Heathrow and long-distance trains leave from under the main span of the impressive glazed roof, on platforms 1 to 8.

Although shown on the London Underground map as a single station, Paddington's 4 Underground lines all have separate histories and are not the integrated single station they would be if designed from scratch today. From a passenger perspective, it makes little difference. All are accessible from the train station and are clearly signposted.

We have a dedicated page to using and buying tickets on the London Underground system. The London Undergroundruns every couple of minutes between about 5.30am and midnight. When the Underground is closed there is a good night bus network from outside the station that will get you to most places in central London. 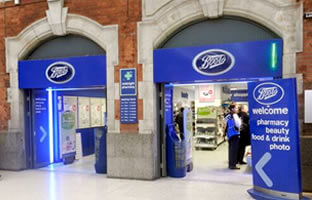 As a major rail station, you can expect to find most of the normal shops that travellers and commuters would use regularly. There are countless outlets offering most snack foods from Burger King through to baguettes, pizzas, pastries. Bars and restaurants offer more substantial fare.

There is a branch of Boots chemists and a choice of newsagents and money exchange facilities. There is also a small supermarket.

Open 24-hrs for tickets for same day travel. Advance tickets are available between 7am and 9pm every day.

Public toilets with baby changing facilities are available at a small charge. You will also find showers available.

Many ATMs can be found dotted around the station. There is also a foreign exchange kiosk (not 24-hrs).

There are also luggage trolleys which you will need a refundable £1 coin to unlock.

There are photo booth machines if you require a passport size photo.

Paddington has a visitor centre to help visitors with their travel plans.

There are some phone booths available dotted throughout the station but rare is the passenger without a mobile phone these days. You can though access Wi-Fi which is provided by private operators that charge for the service.

There is a manned left luggage office run by the Excess Baggage Company that runs all left luggage facilities in London stations as well as Heathrow & Gatwick Airports. Search their website for charges and opening hours.

The taxi rank is by Platform 1 and there is always a line of London's famous black cabs waiting. Behind the cab rank are local bus stops with routes all over London. Escalators go down to the Underground from within the station. 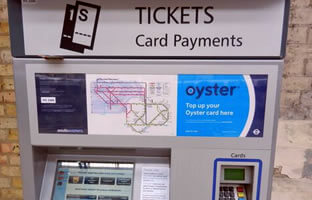 The full train timetable and fares available are publicised from 3 months in advance. As a general rule of thumb, for journeys of around an hour or so there is no financial advantage in pre-purchasing, you may as well buy at the station on the day of travel.

For longer journeys, advance purchase fares offer great savings and it really is worth making the effort. Buying a ticket on the day for a long inter-city train journey often results in ticket prices that are eye-watering.

Buy any time, travel any time
Anytime fares are fully flexible tickets, with no time restrictions on when you can travel. With an Anytime ticket you can also break your journey at stations along the route of travel. For short journeys in the London area you normally get the same fare as if you booked in advance. For long inter-city fares, buying tickets like this can be very expensive. We recommend deciding on a travel time and sticking to it.

Buy any time, travel off-peak
These tickets may require you to travel at specific times of day, days of the week or on a specific route. Where there is more than one Off-Peak fare for a journey, the cheaper fare with more restrictions will be called Super Off-Peak. The times that constitute off-peak are very variable, there can even be different times for off-peak between the same stations in different directions.

Buy in advance
For longer distances, travelling by rail can be very expensive when purchasing standard fares, often more expensive than flying. Advance purchase tickets on these longer distances therefore can offer great savings. These are subject to availability hence limited numbers and can be purchased online to collect from a ticket machine in key railway stations like Paddington or booked at a ticket office. 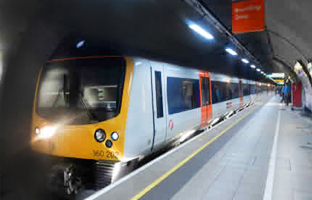 A good proportion of visitors to the UK using Paddington Station will be doing so arriving on one of the airport trains from Heathrow into Paddington. The Heathrow Express is the train that gets all the marketing budget, but the TFL Rail Heathrow train is worth being aware of, especially if you are watching the budget.

The Heathrow Express is simply the fastest, most comfortable and reliable way to get between Heathrow Airport and Central London. The only good reason for many people not to use it is the price of tickets.

Railcards are money saving passes targeted at leisure travellers to encourage them to use the British railway network on their travels. You cannot use them for London Underground and DLR tickets.

There are many Railcards available, the broad idea of all of them is that you pay an up-front flat fee for a Railcard, with a one or three years duration. This enables you to get significant discounts on nearly all the future train tickets you buy.

If you regularly use the railways for leisure travel or are using the railways to tour the UK, they are well worth looking at.

The railways sponsor a hugely popular and long running promotion that allows people using the train to visit leading attractions to get two people admitted for the price of one.

When visiting London by train, you can get 2 for 1 admission to many of London's major sights including the Tower of London. A major saving.

The full list of participating attractions is very, very long and covers all of Great Britain. If you have train tickets to London and you are doing some sight-seeing it’s a very worthwhile promotion to look into.