Some of the best budget hotels in central London are featured on this page, both no frills budget chain hotels with familiar brand names and local independent hotels. However, if the lowest price is going to be your over riding factor for selecting accommodation then you're probably best to start looking at alternative cheap bed and breakfast hotels. 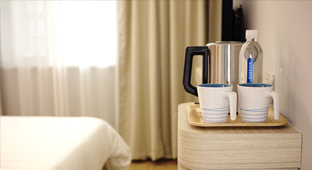 Both Travelodge and Premier Inn may have two or three hotels within 5 minutes' walk of each other. They are often found everywhere, even in the very heart of the City of London where most accommodation is of the full service 4- or 5-star category.

Much more so than the budget chain hotels, the independent 3-star grade hotels will include breakfast in the room rate. Indeed in many budget hotel areas it's hard to differentiate between 3-star independent hotels and those graded as a bed and breakfast.

Location and the day of week you stay will have a big impact on the hotel rate you pay. Sunday night is the cheapest night to stay at most hotels in London. This rule applies in most areas right across the capital.

If the hotel is in a business district then the cheapest rates will be at the weekend. For hotel districts dominated by leisure travellers, the weekends are normally the most expensive time to stay.

The south side of the River Thames and Tower Bridge hotel areas are examples where hotel rates are deep discounted at the weekend when the businessmen are at home. Bayswater is an example of a leisure district where room rates are far lower during the working week than at the weekend.

Kensington is one of the largest hotel areas for budget hotels. Room rates are comparatively stable all through the week but will see a slight softening at the weekend. Kensington is particularly convenient for those travellers using London's main airport, Heathrow. 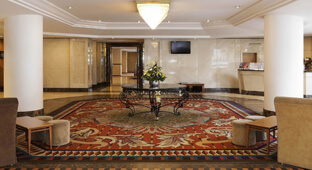 This ibis offers an elegant restaurant, La Table, as well as a traditional English pub, the George and Dragon, showing live sports. The location offers a variety of pubs in the vicinity and there's easy access to the whole of London, being just a couple of minutes' walk from West Brompton Underground. Comfortable rooms feature a desk as well as tea/coffee facilities and are tastefully decorated. 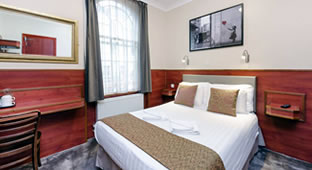 A good value hotel located within 5-min walk of both London King’s Cross Station and St Pancras International Station. Situated in a quiet street offering a peaceful hotel experience. The Bloomsbury Theatre and the Shaw Theatre are within 1 mile with plenty of restaurants nearby. Comfortable rooms with standard facilities. 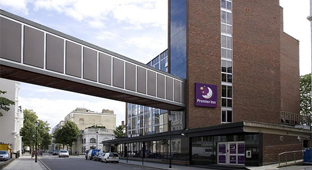 This striking hotel combines excellent accommodation, location and great value. A restaurant is available on site and you can book an all you can eat breakfast. Rooms are clean, modern and tidy with all mod-cons as you’d expect from one of the major hotel chains. Ideally located for the Natural History Museum, Albert Hall, Science Museum and West End theatres. 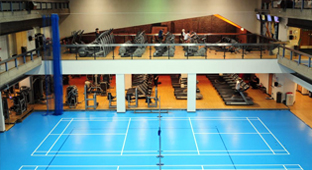 For a budget hotel, this one packs in a lot of facilities! Beneath the St Giles is London’s largest health and fitness facility, where you can have discounted access to a pool and wellness centre, with optional paid for massages. Rooms have tea and coffee facilities, tv and safe. It is an easy walk to Covent Garden, Piccadilly Circus and the theatres. 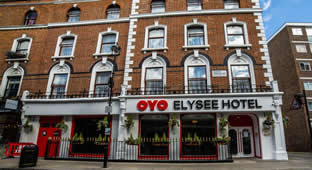 This popular bed and breakfast is situated between Paddington and Bayswater and features light airy rooms with flat screen TV, in-room safe and tea/coffee-making facilities. There is a comfortable lounge/bar area with a selection of drinks. A full English breakfast is available on top of room price. Hyde Park is a 5-min walk away. 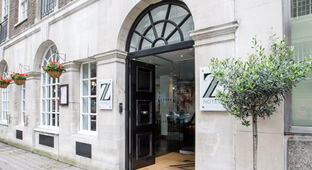 Contemporary rooms with hand-crafted beds. Free Sky Sports and Movies available on the 40” HD TV. Clever design allows this compact hotel to offer everything you’d need. Nice touches include complimentary cheese and wine in the evening. In excellent location to explore London from with Buckingham Palace within 5-min walking distance. 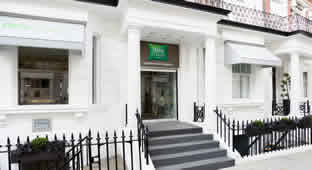 This ibis hotel is just a 3 minute walk from Earl’s Court Underground Station with great access to shops, pubs and restauarants all around. Housed in an attractive, period building, with quirky artwork inside, this hotel offers affordable accommodation with 24-hr snack bar, mini-gym and comfortable, modern rooms. 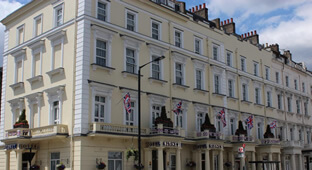 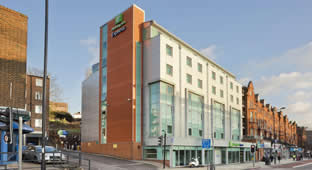 This reasonably priced modern hotel is well connected – just 2 minutes' walk from Finchley Road Underground and direct airport buses to Luton and Stansted airports. A buffet breakfast is included in your room rate too – even better value. What's more – kids eat free! There is a cocktail lounge and off-site restaurant delivery is available. Cheapest rates at weekend. 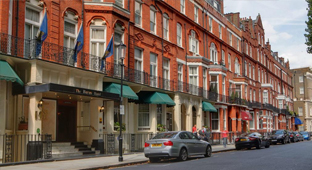 Enjoy staying in a Grade II listed Victorian building in a quiet residential square. Contemporary fully equipped rooms offer satellite TV and outside there is a private walled garden to enjoy food or drink within. Ideal for a solo traveller with easy access to nearby restaurants, bars and bakeries or for anyone looking for a quiet well-equipped hotel with character. 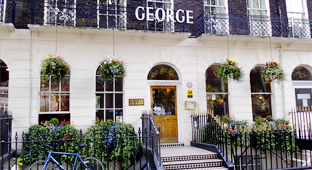 This comfortable hotel is just 550 yards from Russell Square, located on the leafy and popular Cartwright Gardens. Guests enjoy a cooked breakfast included in the price, in the spacious dining room. Rooms are bright and airy and come with satellite TV with on-demand movies, work desk and hairdryer. 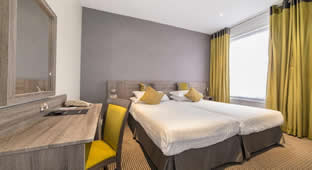 Just a 5-min walk from Hyde Park, this hotel offers spacious rooms and continental and full English breakfasts. Past guests have rated it highly for both location and friendly staff. You can relax in the cosy lounge bar, with snacks and drinks. A good value choice. 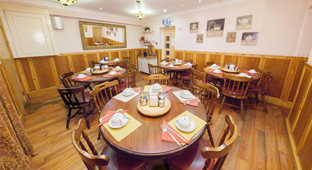 Family run for over 50 years, this hotel offers budget accommodation with a full English breakfast included in the rate. The location is great; less than 5-min walk from Kings Cross and St Pancras Stations. The British Library is only 2-min walk away, as well as Bloomsbury with its shops and restaurants. 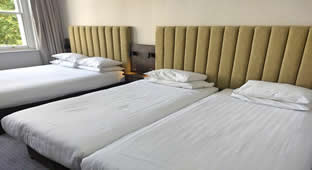 Great location in Kensington Gardens Square. Close to Hyde Park and Portobello Market, this family-run hotel is situated in a grand Victorian terrace. Relaxing tastefully decorated lounge and great service from the owner! A good breakfast can be included in the price. 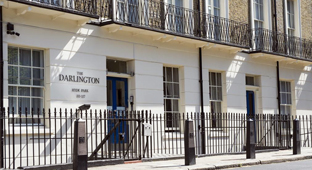 One of the best-received hotels in London with a legion of fans who would never dream of staying anywhere else. Victorian townhouse with a 24-hour reception. Refrigerator and a personal safe in the room. Full English breakfast or continental breakfast served in the hotel conservatory, included in the room rate. This hotel is a 3-min walk from Hyde Park. 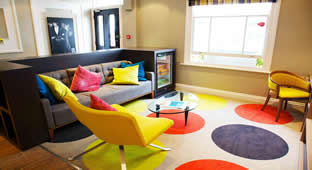 Just five minutes' walk from Victoria rail/underground stations, this is a fully renovated Georgian-style town house hotel. Air-conditioned rooms feature stylish decor, satellite TV and private showers. For self-caterers, there are rooms available with a kitchenette and microwave. A good continental breakfast is included in the price. 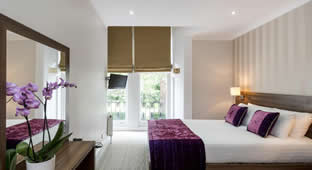 Just a short walk from Hyde Park, this consistently well-reviewed hotel is made up of five inter-connected Victorian-era buildings. It is extremely well decorated with an elegance and spaciousness that extends from its luxurious lobby to the stylish rooms. Continental breakfast is available. 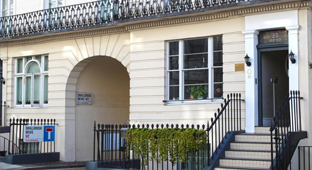 This boutique style hotel is just a 3-min walk from Paddington Station and a 5-min walk from Hyde Park. Rooms here are spacious, stylishly decorated and well equipped. Guests can enjoy breakfast in the morning and there are plenty of restaurants and bars nearby. A popular, well thought of hotel in an excellent location.