'The West End' is a broad term used to describe the areas in London including Oxford Street and Marble Arch, Leicester Square and Covent Garden, & Mayfair and Piccadilly. As this area of London is spread out, we have three separate pages for you to learn a little more about each.

If you want a luxury full-service hotel and stay in the heart of the most exclusive part of London with shopping, nightlight and theatres at its doorstep, the West End of London is your best location. Each of its areas we mentioned above has its own character and offers visitors a different range of attractions and facilities.

Distinct locations in the West End of London

If you are looking for ultimate luxury in London then Mayfair is the most exclusive area with some of the most famous and luxurious hotels in the capital.

If it's theatres and nightlife you want, then the Leicester Square and Covent Garden area has some very comfortable hotels in the heart of theatreland.

Oxford Street and Marble Arch area is on the edge of the official West End and will give you all the shopping you need with well-known flagship stores.

About the West End of London and its history 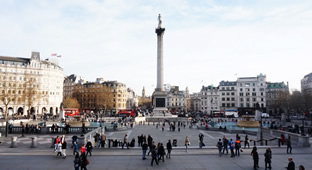 The West End of London is a loose term for the central part of London that in terms of theatres and nightlife is viewed as the centre of London for leisure visitors.

Trafalgar square in the West End of London is a major tourist attraction and is also the actual geographical centre of London. All road distances measured to London are taken from here.

The West End actually started out as an area that was convenient for the rich and powerful to have their mansions. This is due to it being close to both the business centre of London and the government offices. Little has changed in this regard. The West End still encompasses the Houses of Parliament, Big Ben and Westminster Abbey on its southern border and to the east The City of London including St Paul’s Cathedral and the Tower of London is known as the business centre of London.

The West End, north of Westminster and west of the City of London is London's leisure district where you will find most but not all of the theatres, nightlife and shopping. 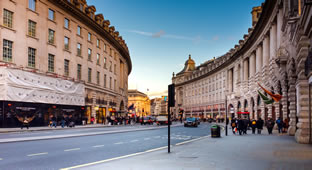 Unless you are extremely wealthy, Heathrow is the only airport most people would consider a taxi to and from the airport. Hotel shuttles, common in many countries have not found a place in the market in London, this is because of the excellent public transport links already available. The only direct link to any of the airports from the West End by public transport is the London Underground to Heathrow Airport.

Although the West End is in the very centre of London it is not well served with direct, affordable options to London's airports and cruise ports. All of the central train stations, if you are travelling from within the UK are also outside the West End.

The Piccadilly Line of London Underground stops at Green Park, Piccadilly Circus, Leicester Square and Covent Garden from Heathrow. At the extreme north-west tip of the area at Marble Arch, you can get airport buses to Stansted and Luton Airports.

Otherwise, you'll need a taxi to one of the gateway train or bus stations to the airports and cruise ports from your hotel in the West End. 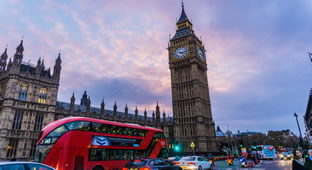 Traffic in the West End is often at gridlock, the best way to get about is to walk or get the Underground. As a result, day tour vehicles do not like to come into the West End district if they don't have to. If you are taking a day tour out of London to somewhere like Stonehenge or Oxford there will be token pick-up hotels in the West End when traffic is light in the morning before 8am but the vast majority will be in the hotel districts surrounding or outside the West End.

In the evening, no day tour company will venture into the West End for drops, you'll be put off the tour bus outside the West End and expected to get the Underground or a taxi to your hotel.