Day tour to Edinburgh from London by train

Edinburgh is around 4 hours and 20 minutes by fast train from London. With a very early start and a late return you'll have 6 hours in Edinburgh to explore.

Waverley Station where you get off the train is at the very heart of the city of Edinburgh, so you lose no precious sightseeing and shopping time. All the main sights are within easy walking off the train station.

This tour is independent; not a guided tour. On purchasing you show your e-tickets to the staff at King's Cross Station at the required time.

The trip includes tickets to Edinburgh Castle and a ride on the popular Edinburgh open top hop-on bus to appreciate the wonderful capital from a fantastic perspective.

EDINBURGH IN ONE DAY FROM LONDON 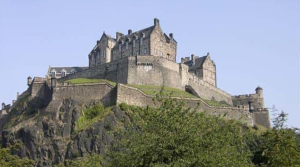 6.45am - check in at Kings Cross Railway Station for a 7am - departure

11.22am - arrive at Waverley Station, Edinburgh

You will need to be at King’s Cross Station at 6.45am with your train e-tickets for your outbound and inbound rail journeys. Your train will depart at 7am and arrive in to Edinburgh at 11.22am.

You will need to print your Open Top Bus Tour and Edinburgh Castle tickets.

A hop on hop off open top bus tour will take you round all the main sights in Scotland's capital.

From your vantage point you will see the Palace of Holyroodhouse, and Edinburgh Castle, where you will be visiting later in your day.

You’ll cruise down Royal Mile, one of the busiest streets in Edinburgh’s historic old town, and past the famed Greyfriars Bobby monument.

Edinburgh Castle and return to London

Following your open top bus tour you head to Edinburgh Castle, where your ticket has already been paid. A thousand years of history await you.

From its Portcullis Gate through to the Argyle Battery, with six guns and spectacular views over the Fife, and the Great Hall where prisoners in the 18th and 19th century were held, Edinburgh Castle is a fascinating glimpse into the past.

From its commanding position on top of Castle Rock, there is much to see at Edinburgh Castle including the Crown Jewels of Scotland, the Stone of Destiny, the Royal Palace and Great Hall.

The views from the Western Battlements are spectacular, where on a clear day you can even view distant Highland peaks, which look particularly captivating when capped with snow.

Bid goodbye to Scotland. Check in time from Edinburgh Waverley Station is 5.15pm, your train departs at 5.30pm, arriving back in London at 10.09pm.

Prices displayed on the banner link are the current prices for this tour.

Sometimes on special occasions there may be slight changes to the tour, dates or price so do check on the booking page linked below. Extra dates are often put on around long holiday weekends, notably Easter and New Year.

Major credit and debit cards are accepted. You will be emailed a confirmation with a booking reference after reservation.

To book you will need your booking reference and in addition the first and last names of all passengers when ordering. There are no paper tickets.

On the tour detail page from the link below, there is a date drop-down at the top right of the page, which depicts which dates still have availability. By selecting your required date you start the reservation process. Once we list a date for operation it is guaranteed to run, there are no minimum numbers.

EDINBURGH IN ONE DAY FROM LONDON


Top of the page