How to get to Warner Bros. Studio Tour London - by train 2023

Getting to Harry Potter Studios by public transport from London

Where are the Harry Potter Studios?

Warner Bros Studio Tour London - The Making of Harry Potter is not in the centre of London, it is located just outside London at Leavesden, Watford. The nearest railway station from London is Watford Junction from where an official shuttle bus (which you pay for) runs to the Studio.

For those staying in Central London you need to allow at least an hour to get there by public transport. This page explains your train travel to Harry Potter Studio options including Oyster card, Travelcard options, peak and off peak, and how to save 1/3 on rail tickets from Euston to Watford using GroupSave if you are a group of three or more adults.

If you are looking for answers to questions such as How long does it take to do the Harry Potter Tour in London?, or What will I see? we have a page answering these and more questions, from our experience of visiting.

Other options are available if you do not wish to make your way to the Harry Potter studio independently. Tour options combine transport from centrally located locations in London (Victoria, Kings Cross), with entrance tickets to Warner Bros. Studio, saving you the hassle of finding your own way there.

The fourth - International Friends - offer something a bit different; a Harry Potter tour with hotel pick up.

If you already have Warner Bros. Studio Tour London tickets we can provide you with a bus shuttle only option.

• Up to 10 shuttles per day • Pick up from Victoria or Baker Street. • Return luxury air-conditioned bus transportation from London with free Wi-Fi • Bus only - purchase Harry Potter Studio tickets separately


Top of the page

Watford Junction Railway Station is the closest that public transport from Central London will get you to the Warner Bros. Studio Tour London. You will find it marked on the London Underground map in the top left.

There are various permutations you can get to Watford Junction from the London area but from Central London the fastest and simplest option are trains running from Euston Railway Station.

How long will I need to allow for travel from Euston to Watford?

There are two types of train that travel between Euston and Watford Junction. The trains that are part of the London Overground whose trains stop at every station that take around 50 minutes and the trains that belong to the national railways (Midland Railways) where Watford Junction is often the first stop and trip duration being 15-20 minutes.

Tickets are interchangeable between the two types of trains so you can use tickets issued by the railways or use the Oyster Cards, Travelcards and other fare payment options you use on the London Underground and buses.

This makes things very complicated choosing whether you buy train tickets from the national railways or use Oyster Cards or Travelcards like you use on the London Underground, (see the discussion below).

If you have an Oyster Card, the default transport pass in London, you can use that to pay for the fare to Watford Junction.

If you have a Travelcard it is very unlikely you have bought a Travelcard to include the Watford Junction travel zone, the majority of leisure visitors will only have a zone 1-2 Travelcard.

An official shuttle bus (electric) runs around every 20 minutes between the bus station in front of Watford Junction Railway Station to the studios, about a 15-minute journey.

There is no fee as the journey is included as part of your entry ticket.

Plan to arrive at Watford Junction 45 minutes before the time stated on your ticket and have your ticket or booking confirmation ready when boarding the shuttle bus. You will not be able to board the bus without a Warner Bros. Studio Tour - The Making of Harry Potter entrance ticket.

Buses run every 30 minutes from 9.20am (with additional services available from 8.15am when the first tour is at 9am).

As said in the introduction you can either buy separate train tickets for your journey between Euston and Watford Junction or you can use Oyster Cards or credit/debit cards that support contactless payment - which many people will be using for their travel within London.

Cheapest or easiest rail fare from Euston to Watford and Harry Potter Studio?

It can be complex which option is best for you. If you are comfortable with understanding the comparisons between Oyster and national rail tickets you will be able to make the right choice for your needs.

However, as we note below, the simplest option as a visitor might be to bypass Oyster and just buy simple Travelcards for an additional cost of 60p per person for a return ticket.

Free travel for kids under 11

On the London Underground, London Overground and London's red buses, kids under 11 travel free without a ticket. On the national railways only kids under 5 travel free.

With both London Overground and Midland trains of the national railways both running along the same track an exception has been made that kids under 11 can travel free on Midland trains between Euston and Watford Junction only.

You can use either railway tickets or London public transport tickets like Oyster on both trains. The key point for those travelling to Watford Junction is that you can use Oyster cards and Contactless cards on the fast Midland trains.

What you need to know about using Oyster cards in London

The Oyster daily cap is a daily ceiling on your expenditure on fares when using an Oyster Card. If you just travel in the centre of London (zones 1-2) this maximum is £7.70, by travelling out to Watford Junction you will increase substantially the daily cap figure.

To interconnect at Euston between the London Underground and the trains to Watford Junction you have to exit the Underground system and swipe your card again when entering the railway system.

You need to make the connection between swiping out of one system at Euston and swiping your card to enter the other system within 15-30 minutes for your journey to be calculated as one fare. Otherwise you will be charged for two separate journeys.

Oyster Cards generally offer the cheapest train fares when in London, however as Watford Junction is on the farthest edge of London for Oyster use, you will find they are a little more complicated to use for the Warner Brothers Studio.

A simple option would be to pay a tiny premium over the cost of two single Oyster trips (there and back) and buy a return ticket on the railway. This return ticket will cost £13.00 off-peak (against £12.40 for Oyster off-peak return - see above) which is anytime at weekends and after 9am Monday-Fridays.

If you already have an Oyster Card you can of course use this and save a small amount of money, but you will need to swipe out of one system at Euston and enter the next within 15-30 minutes to stay within one fare.

For the visitor to London, the train fare is far simpler to use at a tiny additional cost.

You can use off-peak return train tickets anytime at the weekends.

From Monday to Friday in 2023 the first (of the fast trains) you can use off peak day returns on leaves Euston at 9.23am, due Watford Junction at 9.37am. There is also an option to use the off-peak fare on the 9.15 train but this is a much slower train and will get you in just after 10am.

Use GroupSave tickets to save even more for travel by train to Warner Bros. Studio

GroupSave fares are available as a discount from 3-9 people, saving up to 34%. Tickets are available from 09:30 Monday to Friday and at any time at weekends and Bank Holidays.

They are available for adults only -  however, children aged between 5-15 can travel with an Adult GroupSave ticket as long as the group size is still between 3-9.

You can also use railcards on these fares and realise the usual extra 33% discount.

Use the banner link below to see prices and schedules available for your dates.

TICKETS
& TIMETABLES
Top of the page 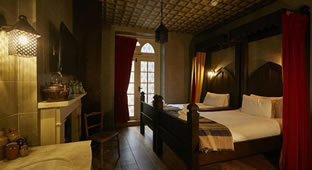 For Harry Potter fans catching the bus from Victoria to the Harry Potter Studio, check out this 4-star hotel featuring fun Wizard chambers, decorated in a style reminiscent of the dormitories at Hogwarts. Chambers sleep up to 6.

This unique, award-winning property offers the charm of an English country hotel in the city - just a 10-min walk from London Victoria Station. Beautifully and individually styled rooms feature modern comforts, such as rainfall showers, large flat screen TVs, a choice of delicious refreshments and The White Company toiletries. Enjoy an award-winning breakfast daily, with a focus on locally sourced, artisan ingredients.

Below you'll find some of the most common questions asked over the years, you can use these to help you or if you are really stuck use our contact form at the bottom of the page.

Harry Potter themed tours & activities in and around London