The quickest and most efficient way to transfer from Gatwick Airport to your central London hotel is by Gatwick Express.

Road based options are relatively slow between Gatwick and central London, the road from Gatwick to central London soon gets bogged down in stop, start urban traffic.

However, most of the trains terminate at London Victoria, which for most people requires a further taxi or alternative to your hotel in London. A door to door service recovers much of that time.

The Gatwick Airport - London hotel van shuttle, although common in many countries, has a chequered history at London airports. Only a fraction of passengers use them and most do not even know the service exists.

Unlike the public transport alternatives run by huge corporations the shuttle service is run by small independent operators.

The van shuttle service is expensive and potentially slow compared with popular public transport alternatives, but much cheaper than a private car or taxi and above all is door to door unlike public transport.

Gatwick Airport has two passenger terminals. It normally takes 45 to 75 minutes after landing to clear customs and collect your luggage.

After you have collected your luggage, you meet your driver in the Arrivals Hall, at the meeting point, normally by the information desk.

The service provides transport for all flights, whatever time of day. The road transfer normally takes 60-90 minutes into London depending on traffic conditions.

Hotel and apartment only are valid destinations in all the major hotel districts in central London, broadly corresponding to zone 1 of the London public transport system.

Each traveller is allowed a maximum of 1 suitcase and 1 carry-on bag. Oversized or excessive luggage (e.g. surfboards, golf clubs or bikes) may have certain restrictions. Please inquire prior to travel to confirm if your excess luggage is acceptable.

Departure transfers are simply the reverse of the arrivals procedure.

The same hotel areas in London are covered. You will be picked up at your hotel or apartment and dropped at departures of the passenger terminal at Gatwick you are departing from. 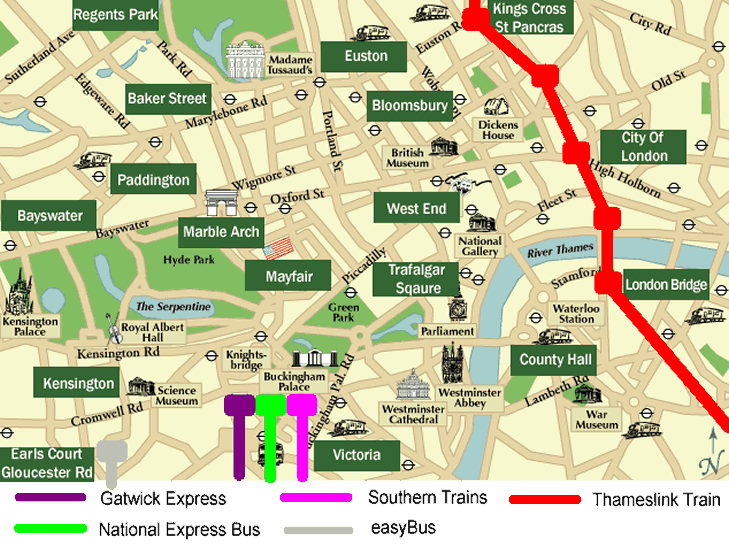