Stage 1 Tower of London to the Bank of England

The walk is a circular walk so it doesn't matter really where you start. We have chosen to start at Tower Hill Underground Station, opposite the Tower of London, so you could start here after a morning visit.

Much of this walk is within the old City of London, the original conurbation when it had a city wall. In the City itself it's a ghost town at weekends, so you may choose to do this section of the walk during a working day.

This walk is split over three pages. While this page covers Tower of London to the Bank of England, two other pages cover: Stage 2 Bank to St Paul's Cathedral and Stage 3 St Paul's to Tower Hill 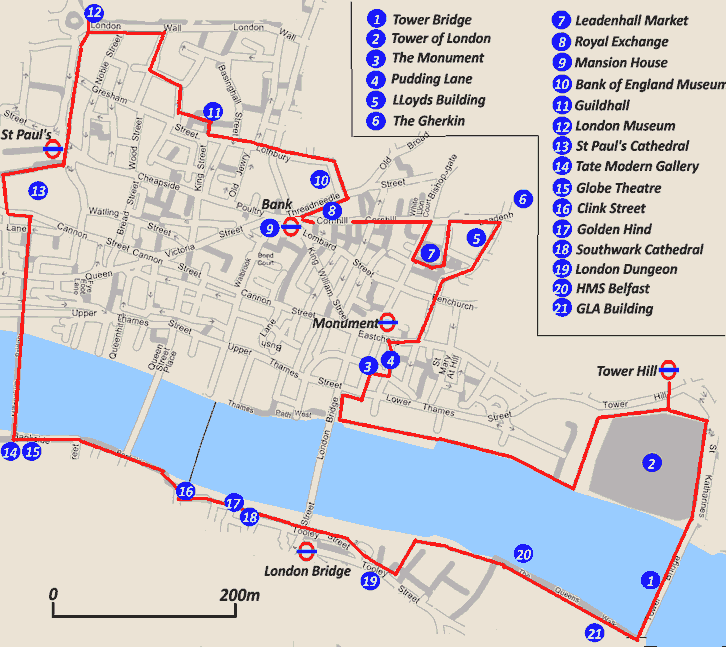 Getting started from Tower Hill

The Tower of London marked the south eastern point of the city wall, where it met the river that formed London's southern boundary. The Tower of London is strategically placed to guard against possible enemies, most liable to approach London coming up the River Thames from the sea.

The Romans, about 2,000 years ago were the first to establish London as a city as we would know it today. As now, London then was built on trading and commerce.

Descending to the riverfront, the patch of the River Thames in front of you between Tower Bridge and London Bridge (the next bridge westwards) is known as the Pool of London. This was the original port of London. At that time the river was much wider than it is now and the opposite bank was just marshland.

London Bridge was the original bridge that forded the River Thames, the first crossing point from the sea. For a long time until 1750, London Bridge was the only bridge across the Thames, partly because of the vested interest opposition of the ferrymen that earned a living plying from bank to bank.

The London Bridge in front of you is only about 30 years old. Its predecessor was sold and shipped as a tourist attraction to Lake Havusa, Arizona.

Turn right just before London Bridge. Take care to cross the busy road that parallels the river, then climb up Fish Street Hill on the opposite side of the road. Fish Street Hill is the first road northwards for traffic coming east from Westminster after crossing under London Bridge. Keep to the right-hand side of the road the short way until the road bends left. On this bend to your right is the Monument.

In 1666 there was the Great Fire of London, destroying much of London. The Monument is a memorial to that event, its height 205ft, is the same as the distance to the baker's shop in neighbouring Pudding Lane where the fire started.

The Monument is the tallest stone column in the world, topped by a vase of flames. It was designed by Christopher Wren who also was responsible for St Paul's Cathedral which we visit later in the walk.

If you're fit enough you can purchase tickets for a small fee and walk up inside the column (311 steps) for a great view from the top.

Head east (back in the direction of the Tower of London) along Monument Street. In a few yards the first road crossing on Monument Street is Pudding Lane itself. Turn left, up Pudding Lane. The fire that started here destroyed 15,000 homes and 87 churches, much of the city area in 5 days. 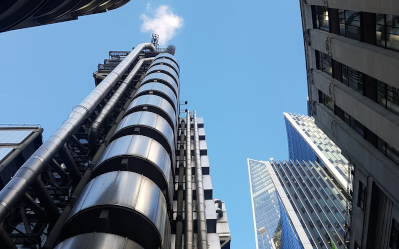 At the top of Pudding Lane, turn right along Eastcheap, then first left up Philpot Lane. In a short while you encounter Fenchurch Street, go straight over. Philpot Lane has become Lime Street.

Follow Lime Street as it bends right and then left. The unmistakable Lloyd's of London building now dominates your attention.

Looking a bit like the Pompidou Centre in Paris, this 1986 building has all its pipes, ducts and lifts on the outside of the building. Originating from a coffee house in the 1860s, Lloyd's is now the world's leading insurance market, covering the most complex and specialist risks, from celebrities body parts to oil rigs.

After continuing past the Lloyd's building, the main road crossing is Leadenhall Street. Almost opposite is St Mary Axe Street. From the corner of St Mary Axe opposite the church you have a grandstand view of the colloquially named Gherkin (for obvious reasons) or 30 St Mary Axe.

The Gherkin was completed in 2004 for Swiss Re, the second largest insurance company in the world. It is now privately owned by several offices and is firmly established as one of the icons of the London skyline. It is not the tallest building, but its 41 floors has captured the imagination of the public.

The Gherkin isn’t normally open to the public but you can visit Helix restaurant and Iris bar, which are located on the top floors and have amazing panoramic views across the City of London.

Now retrace your steps, back along Leadenhall Street and turn left into the next road after the Lloyd's building, Whittington Avenue. 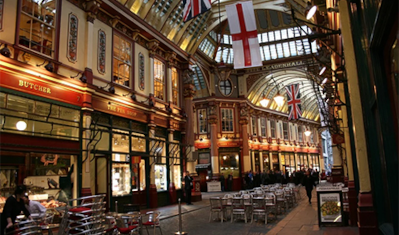 The market stands on the site of a Roman basilica. The original market was burnt down in the Fire of London and was then expanded to sell poultry, dairy goods, leather, wool and meat.

It now contains a wide variety of shops and bars. Wander around, a nice place to browse the specialist shops and perhaps take a coffee break.

Turn left into Cornhill and follow it for 800m to Bank Underground. Along the way your curiosity will be aroused by the alleys and interesting side lanes. You will be rewarded if you follow your nose down alleys and into churches in a very atmospheric part of London, the oldest. Just return to Cornhill from your adventures.

St Peter upon Churchill Church on the south side of Cornhill is the oldest place of Christian worship in London.

In recent times Leadenhall Market has been used as a filming location for the first Harry Potter film Harry Potter and the Philosopher's Stone.

If you're a Harry Potter fan and you want to visit Leadenhall Market on an organised guided walking tour we can thoroughly recommend the award-winning Muggles Walking Tour in London.

This is the end of Stage one of the London City Walk.

For the other stages please see: