This walk in a very short distance covers many of London's main sights including Big Ben, Westminster Abbey, Buckingham Palace and the London Eye to name a few.

If you walked this without stopping you'd do it in under an hour, but as there is so much to see you probably will have done well to complete it in one day.

The walk is split over two pages. While this page covers Westminster to Horse Guards, we have another page London Icons Walk: Stage 2 Horse Guards to London Eye & Houses of Parliament via Buckingham Palace. 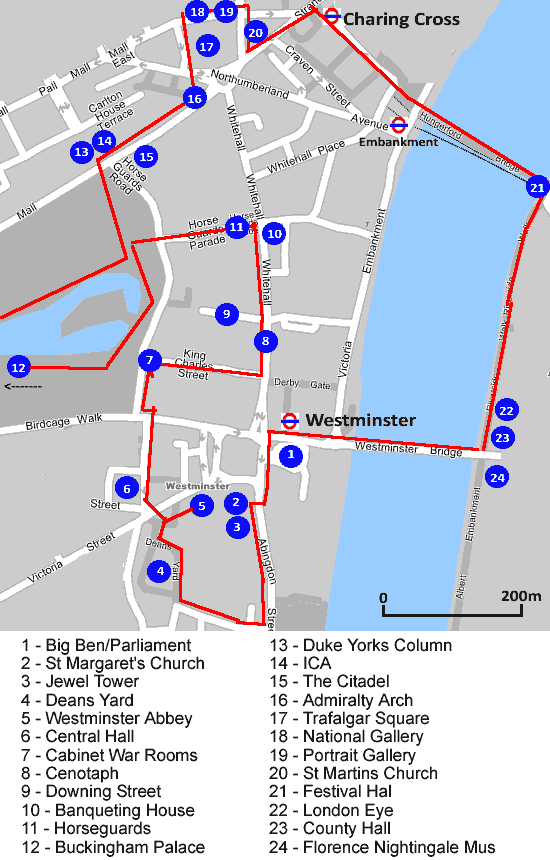 Getting started on your London Icons Walk

The walk is a circular walk, so it doesn't matter really where you start. If you want to see Changing of the Guard at Buckingham Palace late morning it will probably be best advised to start the loop at Westminster Abbey.

We have chosen Westminster Underground Station, served by the Circle, District and Jubilee lines of the London Underground.

We start at Westminster Underground. When you come out of the main exit, the Elizabeth Tower with its famous bell, Big Ben, perhaps London's most famous icon, towers above you. You are standing at the western end of Westminster Bridge. Cross over the busy main road in front of you, using the official crossing or underpass.

The Elizabeth Tower is part of the Palace of Westminster originally started in 1020. The palace was burnt down in 1834, so the Gothic architecture you see today is comparatively recent.

The palace houses both of the the UK's ruling bodies, the Houses of Parliament and the House of Lords.

When parliament is sitting after dark, a light shines from the top of The Elizabeth Tower. For obvious reasons, security is out in force.

It is possible to arrange tours, visit debates in the chamber, even climb the tower. However don't expect just to turn up and walk in. For UK residents going through their own MP it is much easier than for foreign visitors who can only tour during the summer opening with tickets purchased in advance.

Walk along the eastern boundary of Parliament Square heading south with Westminster Palace on your left.

On the green area in the centre of Parliament Square there are normally protesters of one sort or another with placards and sometimes tents.

This central area is not solid earth, if a vehicle strayed onto the green there is a chance it may fall into the London Underground line below.

St Margaret's acts as the local church for the House of Commons opposite.

The printer, William Caxton and the explorer Sir Walter Raleigh are buried here. Free lunchtime concerts are held regularly during the summer. This is not a tourist attraction, but a working church in which you are welcome to worship. 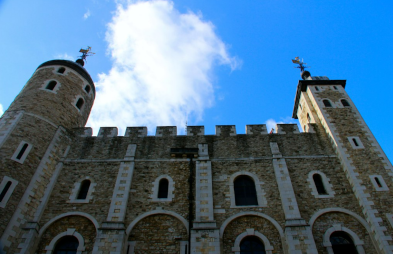 Going south from St Margaret's and immediately next door is the Jewel Tower. The Jewel Tower is a surviving part of Westminster Palace from the fire in 1834.

The tower was built to house the King's wardrobe and jewels in 1365. Today it is run by English Heritage and is used to house the 'Parliament Past and Present' exhibition about the history of Parliament (admission charge).

Now, keep going south and you come to a long piece of grass. This is a favourite place for TV people to carry out interviews with the politicians from parliament.

At the end of the grass area there is a road turning off right, Great College Street which we take. You immediately experience a different atmosphere. On your left are residential buildings, a favourite area for politicians to have apartments. On the right are the grounds of Westminster School.

At the end Of Great College Street turn right into Dean's Yard. Yes members of the public are allowed in. Dean's Yard is like a small village in the heart of London. It is a large square green surrounded by the buildings of Westminster School and Church House, the headquarters of the Church of England.

Westminster School dates back to 1340 when the Pope encouraged all monasteries (Westminster Abbey) to support a school. Exit the yard at the opposite corner to your entry. Turn right and Westminster Abbey faces you. 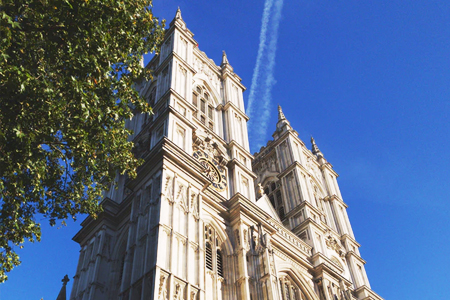 Like Big Ben, Westminster Abbey is one of the main tourist mainstays and is on many people's itinerary on their first visit.

The building you see now was erected by Edward the Confessor in 1065, when he set his throne in the neighbouring Westminster Palace. Westminster Abbey has become the setting for coronations, burials, funerals and marriages.

On leaving Westminster Abbey, head west towards Victoria. On the other side of the road is a huge modern conference centre, Queen Elizabeth Conference Centre, set back from the road.

Cross over to the side of the road of the conference centre. Turn right at the next road, Storeys Gate. Facing you when you turn is Central Hall. Central Hall played host to the first assembly of the United Nations in 1946. Continue northwards the length of Storeys Gate.

At the northern end of Storeys Gate at a T-junction with Great George Street. Turn left, then immediately right into Horse Guards Road. Keep on the right hand side of the road, St James's Park on the other side we will visit later.

After just 100m you will come to the Cabinet War Rooms on your right. This is where in the Second World War Churchill directed the war from deep underground. This museum (admission charge) shows you the facility much as it was, with map room, cabinet room where government sat and Churchill's own private quarters.

By the Cabinet War Rooms are steps up to King Charles Street. You are now surrounded by imposing government buildings on either side, all along to the end of the street. On your right is the Treasury, on your left the Foreign Office. 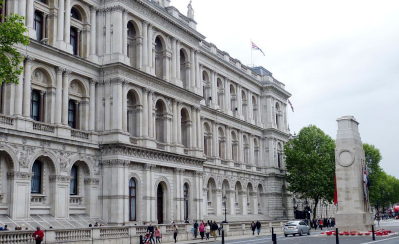 Turn left at the end of King Charles Street, you are now in Whitehall. Immediately on your right in the centre of the road is the Cenotaph, pictured. Built in 1920, the monument is the centre of the nation on Remembrance Sunday, the nearest Sunday to 11th November.

Royalty, politicians and war veterans meet and the monarch lay down wreaths in memory of war dead. If you are in the UK around this time you will see many people wearing red poppies and volunteers selling them, proceeds go to the welfare of ex-military. There are similar memorials all over the country.

Next turning on your left is Downing Street. You've seen the Houses of Parliament and the home of government agencies all around you, this is where the Prime Minister lives and works at Number 10. The Chancellor, responsible for finance is next door in Number 11.

Until 1989, you could walk right up to the front doors of Number 10. Because of security there are now big black iron gates barring public entrance to Downing Street. 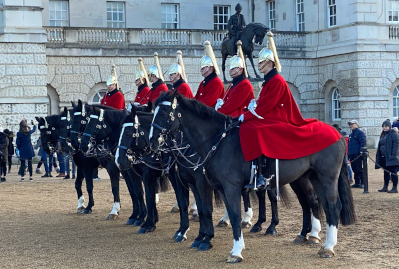 Past more government buildings including the Cabinet Office and next on your left is Horse Guards. There will be invariably a crowd around the entrance, where two costumed soldiers on horseback offer a premier picture opportunity, (see right).

Built on land where jousting had taken place, this imposing guard house was built between 1750 and 1758. Only members of the royal family are allowed to ride through the arch.

Changing of the Guard is held here at 11am (10am, Sundays). Many people find this location much more satisfying than the more famous Changing of the Guard at Buckingham Palace. Here crowds are much, much smaller and you are much closer and get uninterrupted close up pictures.

On the other side of the road (Whitehall) at the junction with Horse Guards Avenue is the Banqueting House, the only surviving building of Whitehall Palace.

Whitehall Palace was England's main medieval palace in Tudor and Stuart times. it once contained over 2,000 rooms. The palace was destroyed by fire in 1698, except for the Banqueting House. The Banqueting House is famous as the location of Charles I execution, every year on the anniversary a wreath is put outside.

You can visit this sumptuous building for which there is an admission charge.

On the other (northern side) of the junction with Horse Guards Avenue is the Old War Office, home to the Intelligence and Defence agencies. Underneath the building is a military command centre where Royalty and government would retire to in a Doomsday scenario. Margaret Thatcher directed the Falklands War from here.

This is the end of Stage one of the London Icons Walk.