LEGOLAND® Windsor - how to get to there from London

Your guide to LEGOLAND® by car, public transport or private hiring of bus for stopover

The main choices for visiting Legoland Windsor are train from London Paddington or Waterloo, (fast option, more expensive), followed by public transport via bus from Windsor, or the Greenline bus running from Victoria directly to Legoland.

Your route could depend on whether you are staying overnight in or around Windsor, and whether you wish to check in to your hotel first.

If you wish to go to your nearby hotel in Windsor, the easiest way is to catch either of the trains listed below to Windsor, and once checked in, take the shuttle bus that takes you from the railway stations and Windsor Castle directly to Legoland.

- London Paddington to Windsor & Eton Central, via Slough on the First Great Western, is the fastest route (30 minutes).

- Green Line operates the frequent (hourly) 702 service 7-days a week from Victoria. The bus is slower and cheaper than the train, passing many hotels in the Kensington area on the way. Allow an hour and a half to get to LEGOLAND from Kensington.

- From London, Golden Tours operates a daily service to the park, with a courtesy collection from over 50 London hotels.

- By public transport there is a LEGOLAND bus that shuttles during opening hours between LEGOLAND and the two Windsor railway stations and Windsor Castle. This shuttle service is operated by the local bus company, not LEGOLAND and there is a charge.

Note: You cannot use London transport passes like Oyster and Travelcard to Windsor. However, the London Pass has a special addition to its Travelcard that allows you to use the train to Windsor from London.

Although most independent visitors to Windsor from London will take one of the two train lines from London to Windsor, road based bus is an option. The service may be of particular interest to those with a hotel in the Victoria or Kensington High Street area through which the bus passes.

The only bus to go direct from central London to Legoland

After making a stop at Windsor, the Green Line Bus continues its journey to Legoland just a few miles outside Windsor. This is the only direct transport from central London to Legoland itself.

Note: The terminus at Victoria is at the Green Line Bus Station, not the bus station in front of the railway station for the red London buses. The Green Line Coach Station is 5 minutes' walk down Buckingham Palace Road that runs besides Victoria Rail Station.

Since most passengers will be leaving in the morning for Legoland, this is their premium time and the fares are more expensive (but still represent good value) accordingly. Fares after 12pm are considerably cheaper.

For families a Group Day Return is available, for either two adults and two children or one adult and three children.

Stop at Windsor on return

If you have a return ticket to Legoland, you can also stop off at Windsor on the way back, if you have time.

The buses going direct to Windsor from Heathrow start at Terminal 5 on the western side of Heathrow, the closest terminal to Windsor.

The buses also pass a few Heathrow Hotels on the way so you can see Windsor as part of a stopover at Heathrow. Most Heathrow hotels have a Hoppa Bus to Terminal 5 running frequently through the day and if your hotel is on the Bath Road there are free public buses. The Piccadilly Line of the London Underground terminates at Terminal 5 as does the Heathrow Express train from London's Paddington Station.

There are luggage storage facilities in each of the terminals at Heathrow, but they are not cheap.

The 71 and 77 buses stop right outside Windsor Castle, but they do not terminate there. The 71 bus although taking slightly longer takes a more scenic route and approaches Windsor from the south stopping in Old Windsor. You can use the 71 bus to visit Runnymede, where the signing of the Magna Carta took place and the Queen's Farm shop. For the Magna Carta get off at the Bells of Ouzely pub at the south end of Old Windsor. 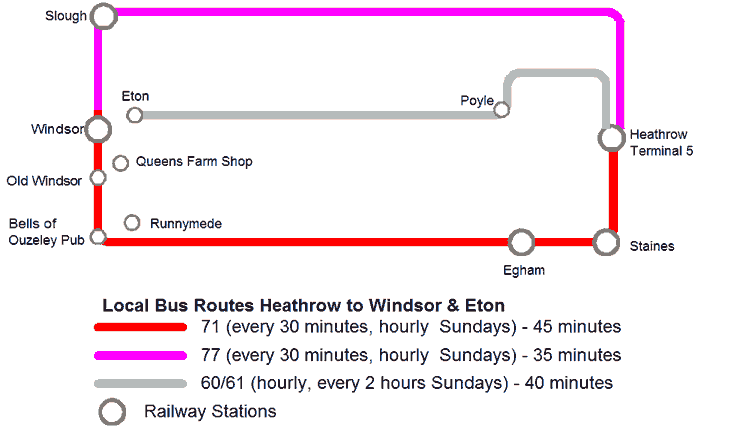 South West Trains run the alternative train service from London Waterloo that terminates at Windsor Riverside Station. If you are staying in the County Hall or Charing Cross, Trafalgar Square area you may find this more convenient, Waterloo Station being very walkable from these hotel areas.

You can also join the train at Clapham Junction rail station served by trains from Victoria and Vauxhall and Richmond Underground Stations.

The Windsor Riverside station itself is just a short 5 minute walk up a slight gradient to Windsor Castle and is by the bridge across to Eton.

You can buy a combined ticket that saves you money on entrance to Windsor Castle from South West Trains. You do not have to travel from just Waterloo either. Just add the combined ticket price of Windsor Castle admission to the cost of your rail ticket to Windsor & Eton Riverside or Windsor & Eton Central. You can make further savings by buying off-peak and family fares. 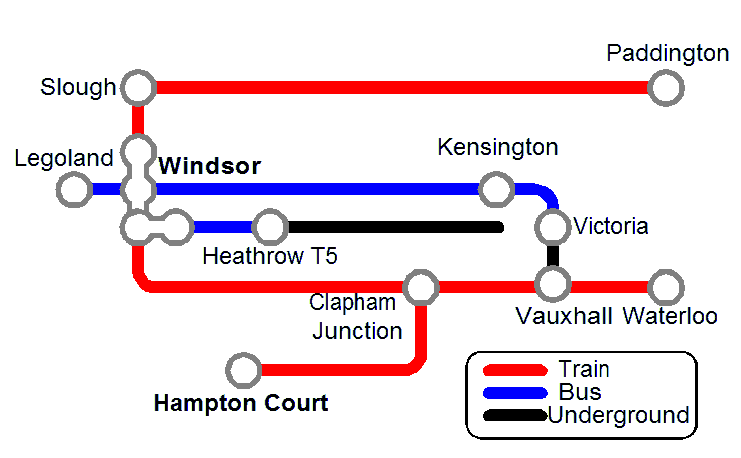 Yes, of course we can provide direct transfers from your hotel whether it be in Central London or Heathrow Airport. But Legoland is also very close to Heathrow Airport so is an ideal way to spend the last day if you have a flight - we will take care of the luggage.