This Kensington short walk crams a lot into a short distance. The distance is around 2 miles and nonstop you could do it in 40 minutes or less. However, many people will be hard put to complete the walk within one long day - there is so much to tempt along the way.

The walk will take in such famous places as the Princess Diana Memorial playground, Kensington Palace, the Albert Hall, The Natural History Museum and the Victoria and Albert Museum to name a few highlights.

Having a map readily available will help you make interesting diversions and adaptions as you progress. 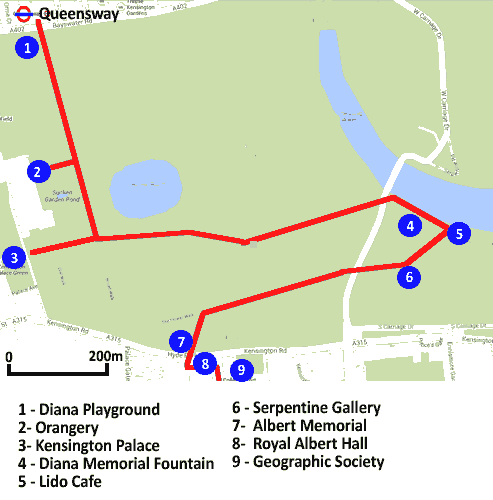 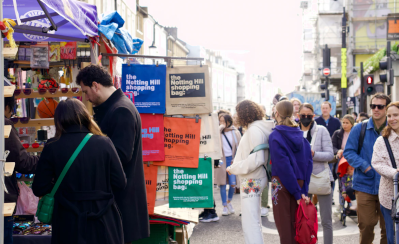 We start the walk at Queensway Underground Station on the Central Line. If it's more convenient, Bayswater Station is just 200m away. If you want to pick up something for snacks along the way there are countless places along Queensway itself.

From Queensway station cross the busy Bayswater Road and enter Kensington Gardens by the Black Lion Gate. On a Sunday artists will be displaying their work along the railings here.

Portobello Market option on a Saturday

On a Saturday, Portobello Market is in full swing about a 10-min walk from Queensway. It pays to get there early to avoid the worst crowds. Instead of starting at Queensway make for Notting Hill or Ladbroke Grove Underground and just follow the crowds and signs.

Use your street map to walk from the southern end of Portobello Road to Queensway or go back to Notting Hill and walk along the Bayswater Road.

Just inside the gates on your right is the playground dedicated in memory to Princess Diana whose home at Kensington Palace is very near. The centrepiece is a huge wooden pirate ship and various other activities and playthings for the youngsters. One of the better free playgrounds you will come across on your travels.

There is also a cafe selling sandwiches, drinks etc. and toilets.

From Black Lion Gate / Diana Playground walk straight down the wide path in front of you into the park. For visitors, Hyde Park and Kensington Gardens can be termed one park. 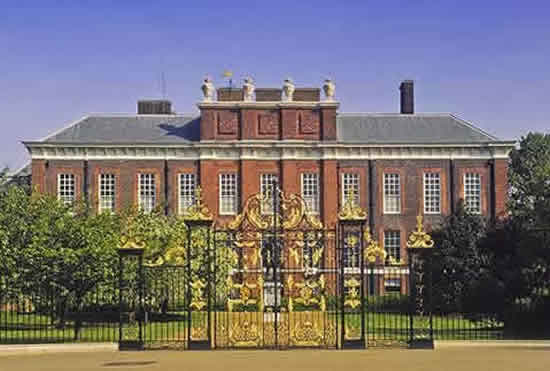 After 5-10 minutes you come to the Kensington Palace complex.

Popular on account of its associations with Princess Diana, Kensington was in the 17th and 18th centuries where the monarch held court before royalty moved onto Buckingham Palace.

The Orangery, (open to everyone) is part of Kensington Palace and is one of 'the' places to take tea or perhaps something heavier when you're in London.

The Round Pond and Peter Pan

It was here that the playwright J.M.Barrie met Llewellyn Davies whilst walking his dog, LLewellyn being the inspiration for Peter Pan. There is a statue of Peter Pan elsewhere in the park.

Now, make your way away from Kensington Palace in an eastward direction, south of the Round Pound. You will see the Royal Albert Hall on the south side of Kensington Gardens, (the large domed building) that we visit later. We walk parallel to the Albert Hall. There are many paths both official and unofficial that crisscross Kensington Gardens which is open parkland here and there are signposts to the various landmarks within Kensington Gardens and Hyde Park.

Once the Albert hall starts to get behind you over on your right, start to take paths that veer slightly to the left rather than right at any junctions. You will either come to the Serpentine lake or the road that crosses Kensington Gardens from north to south. If you hit the road, if there are no signs to the Princess Diana Fountain just turn left until you come to the bridge across the Serpentine lake. 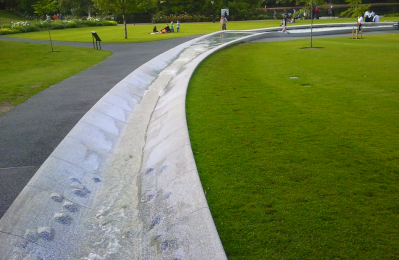 The design aims to reflect Diana's life, water flows from the highest point in two directions as it cascades, swirls and bubbles before meeting in a calm pool at the bottom.

Just beyond the fountain memorial is the Lido Cafe, a perfect place for refreshments sat outside overlooking the lake.

The building complex just south of the Memorial Fountain and Lido cafe is the Serpentine Arts Gallery. Containing galleries for modern and contemporary art, the gallery showcases work by the finest contemporary artists working across a huge variety of media. In the grounds of the Gallery is a permanent work by artist and poet Ian Hamilton Finlay, dedicated to the Serpentine's former Patron Diana, Princess of Wales

From just south of the Serpentine gallery a main east-west artery used by bicycles a lot is our route. We head back west, again running parallel to the southern perimeter of the park. You soon cross the road and continue the other side. You will see the dome of the Royal Albert Hall just follow paths that take you in the general direction of this landmark.

Opposite the Royal Albert Hall you come to the impressive Albert Memorial standing in Kensington Gardens.

Built as a memorial by Queen Victoria to her husband between 1863 and 1875. Prince Albert was responsible for much of what you will see in the next part of the walk. Prince Albert was enthusiastic about education, progress and industry. The piece of land south of this point was made available and developed under Prince Albert's influence and contains world class museums, a university and the Royal Albert Hall concert hall itself.

During the 2nd World War an anti aircraft gun accidentally shot off the orb and cross at the top of the memorial. Now cross over the road to the Albert Hall.

Opened in 1871, the Royal Albert hall is perhaps the UK's most famous concert hall. It was originally going to be called the Hall of Arts & Sciences but Queen Victoria instead had it named after her husband.

The hall is best known for the annual proms concerts, but has hosted a wide range of performances including the first Sumo tournament held outside Japan.

Concerts tend to be 'establishment' entertainers, opera and such like.

Take a look at what's on before making your way to the back of the hall, then descending the steps to Prince Consort Road. In front of you is the Royal College of Music. 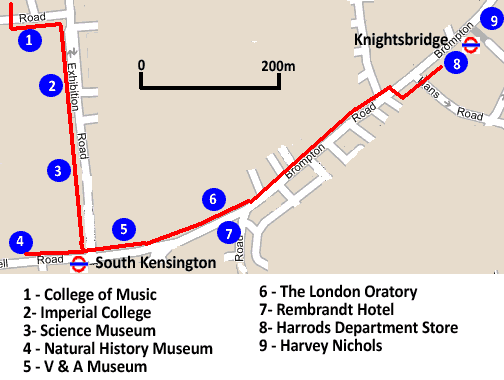 The College teaches all aspects of modern classical music.

Among its famous past pupils are Andrew Lloyd Weber, Gustav Holst, Benjamin Britten and Rick Wakeman. As you can see its the cream that attend here, around 600 students from all around the world.

Turn left at the bottom of the steps, heading eastwards, then right at the T junction into Exhibition Road, then keep on the right hand side of the road. You now pass the Imperial College of Science & Technology, found in 1907 and part of the University of London. One of the top tier of scientific, engineering and medical research and teaching institutions in the world. 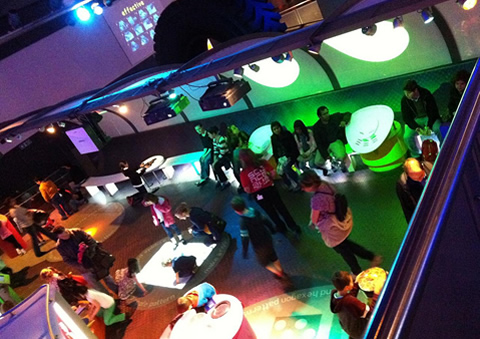 Next on your right is the Science Museum, a world class museum with free entry and open 7 days a week. This really is a great museum for people of all ages, museums are usually quite dry for kids, but this is the exception. The basement and workshops are especially good for youngsters.

Floors of exhibits ranging from full size steam locomotives and aircraft to how computers work will keep many absorbed for a whole day.

(See our London Museums page for links to all the official websites of the museums. All the museums here at South Kensington have free entry.)

Like the Science Museum, entry is free and opens 7 days a week. With more than 70 million specimens , ranging from microscopic slides to mammoth skeletons, the Museum is home to the largest and most important natural history collection in the world.

Now retrace your steps to the busy junction of Exhibition Road and Cromwell Road, walking across Exhibition Road to the Victoria & Albert Museum opposite. The entrance is a few yards on your left.

The Victoria and Albert Museum is the major museum in the UK for arts and design. Like the Science Museum and Natural History Museum entrance is free and the museum is open 7 days a week.

On leaving the main exit of the V&A Museum turn left on the wide pavement heading eastwards towards Knightsbridge. Immediately on your left is the London Oratory, the London headquarters of the Catholic Oratorian Order. There are several masses offered each day and private masses are available by arrangement.

During the 1980s the KGB had a dead letter box near the alter.

On the opposite side of the road is the Rembrandt Hotel, a 4-star hotel. The building was originally commissioned as a set of luxury suites for Harrods department store, which we visit very soon.

Carry on walking eastwards along what is now the Brompton Road. In the middle of the road you will see a green kiosk, probably with a few black cabs parked alongside. This is a tea room for the cab drivers. There used to be similar places all over London, those that are left are now protected. 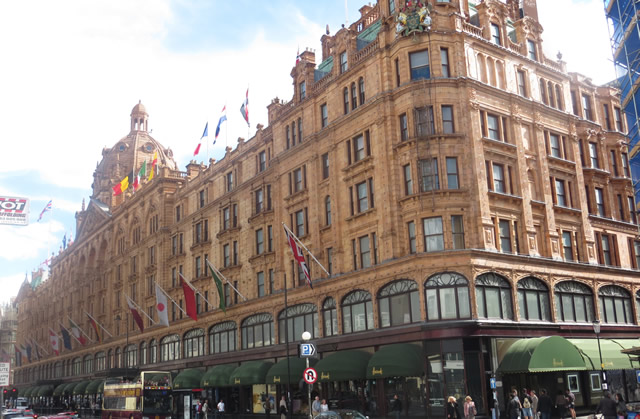 We finish our walk at Harrods, London's most prestigious and Europe's largest department store. The coveted Harrods bag can be relatively cheaply obtained by purchasing in the food hall.

Knightsbridge in which Harrods stands is one of the most desirable areas of London. One of the closest residential areas to the royal palaces and buildings of government. The area was developed about 200 years ago when it was unappealing marshland type terrain, hard to imagine now.

Further along Brompton Road at the junction with Sloane Street on the same side of the road is Harvey Nichols, London's most glamorous store.

Magic of London Tour with Cream Tea at Harrods