An introductory guide to the shopping districts in London

London is a world class shopping venue. For many, shopping is the sole reason to visit London.

Oxford Street is the busiest shopping area and Harrods department store in Knightsbridge is perhaps the most famous single store.

Scratch the surface though and you will uncover many shopping districts in London, each with their own character and target audience.

This page attempts to provide an introduction to these main shopping districts. The page doesn't cover markets, we have a dedicated pages for London Markets.

In terms of numbers shopping, the mainstream shopping street is Oxford Street.

The main shopping strip on Oxford Street is between Oxford Circus and Marble Arch Underground Stations where most of the the flagship stores of the UK multiples are found. Selfridges is arguably the single biggest draw here.

Off the eastern side of Regent Street, close to Liberty you will find Carnaby Street, one of the icons of the 'swinging sixties'. After a barren decade or two, Carnaby Street is thriving again and is particularly attractive to the young.

Regent Street is arguably more upmarket than Oxford Street. Liberty department store near the top of Regent Street sells a wide range of luxury goods including women’s, men’s and children’s fashions, housewares and fabrics. In an age when a lot of shops sell the same brands as others you will find this a treasure trove of unique merchandise.

Other notable stores along Regent Street include Hamleys Toy Shop, the toy shop to visit in London (see London for kids), the Burbury and Barbour flagship store and specialist shops for upmarket teas, chocolate etc as well as exclusive clothing brands.

West of Regent Street and south of Oxford Street is one of the most exclusive retail areas of London. Just off Regent Street at its southern end is Savile Row, famous for its tailor shops where amongst others Prince Charles frequents for his suits.

All along are the most exclusive world famous luxury brands and fine art shops. Among others in New Bond Street are Fenwick Department Store (63), Sotheby's Auctioneers (34/35), Cartier (175), Asprey's jewellers (169).

Perhaps the most famous store in London is Harrods. London's most famous and unique large store is not in the central area but a mile or so away in Kensington at Knightsbridge, next to the Underground Station of the same name.

Knightsbridge is a very exclusive area, one of the wealthiest parts of London where some of London's most expensive hotels are situated. Besides Harrods, Harvey Nichols is another store in Knightsbridge that is a major draw.

Going west from Piccadilly Circus at the southern end of Regent Street is Piccadilly another exclusive area. Running parallel with Piccadilly on its southern side is Jermyn Street, the place to go for 'gentlemen's outfitters'.

It now contains a string of luxury gift outlets from jewellery and shoes through to antiques and silver. Piccadilly Arcade a similar smaller arcade is directly opposite.

Also along Piccadilly you will find Fortnum & Mason. Fortnum & Mason is London's most prestigious food store, founded in 1707. Suffice to say the store doesn't stock normal supermarket food and is full of delicacies, hampers etc. The store is a supplier to the Royal Family.

At the eastern end of Piccadilly you will find Piccadilly Circus, on which you will find Lilywhites. Lilywhites specialises in sporting goods of all kinds, even the most minority of minority sports is catered for. The shop has attracted the best sports people, celebrities and royalty for over 100 years. 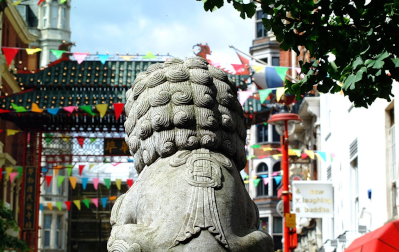 To the east side of Piccadilly Circus from Piccadilly, adjacent to the north side of Leicester Square is China Town which leads through to the Charing Cross Road, the heart of the book shops, both new and second hand.

Tourists flock to the area for its Chinese restaurants, tea houses, supermarkets and traditional Chinese doctors. This is Europe's largest Chinatown.

On the east side of Chinatown is the Charing Cross Road, the book district, both new and second hand.

Foyles is one of the largest book shops, delightfully eccentric and a million miles from some of the chains around.

The road was immortalised in the book '84 Charing Cross Road', also a successful play. The book was based on a real book shop that was visited by such immortals as Charlie Chaplin and George Bernaud Shaw. Perhaps the hey day has passed, but for book lovers a great place to loiter.

Nearby is the popular Cecil Court, which featured in the 1987 film of the same name. Cecil Court is a quaint old fashioned street filled with old fashioned (and in many cases, unusual) bookshops.

Cecil Court is a popular stop on the Harry Potter walking tours. 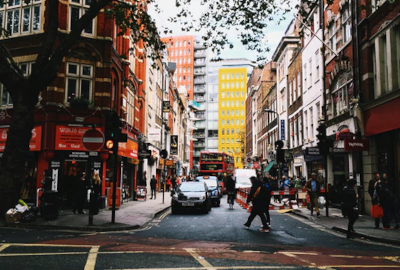 Denmark Street branches off Charing Cross Road to the east near the top of Charing Court Road about 200 yards south of Tottenham Court Road Underground Station.

Denmark Street is the centre of Britain's modern music industry. The relatively short street and alleyways contain musical instrument shops,recording studios and music publishers. There is a slightly seedy atmosphere, but for the music enthusiast a very interesting part of London. Shops are almost exclusively musical instrument shops.

In number 20 Denmark Street, Elton John worked as an office boy. At the same address Paul Simon failed to sell his catalogue of songs that included later hits like 'Homeward Bound' and the 'Sound of Silence'. At number 4, the Rolling Stones recorded their early albums and Elton John also did early work here.

Explore the alley on your left and you will come across a wall full of notices from bands looking for extra members as well as some more recording studios.

The shops line either side of the road for about 500m, until you come to the Dominion Theatre on your left hand side with the junction of Oxford Street.