Our personal experience of the Stonehenge summer solstice 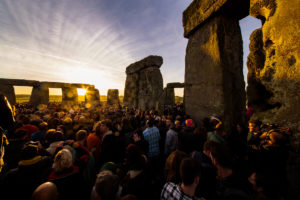 To see the sunrise at Stonehenge summer solstice is one of those moments that will stay with me forever. Stonehenge has always held a special place in my heart since childhood, but more on that later. It is a magical place that defies description and is a genuine wonder of the modern world. To see the sun on the longest day of the year, rising perfectly over the stones is something most people have on their bucket list. When you live only an hour away there is really no excuse not to experience the Stonehenge summer solstice. 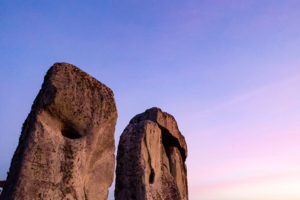 With bleary eyes, I stopped in Basingstoke to pick up the kindred spirit of Lizzie, who like me had always wanted to experience the Stonehenge summer solstice. As we were not enjoying the luxury of the well-organised sunrise tours to Stonehenge that leave London early in the morning, we had to find our own way to Stonehenge. This had advantages and disadvantages. As an advantage, we were able to park up away from the busy car park and avoid any traffic issues. As a disadvantage, we had to drive when we’d rather be asleep and then endure a long walk to Stonehenge and back. 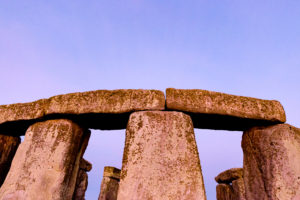 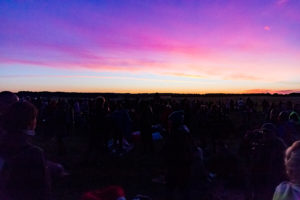 One of the highlights was the walk to Stonehenge

Looking back we decided that the walk to Stonehenge was actually one of the highlights of the experience. Finding somewhere to park in the dark, then opening the doors to hear the distant sounds of beating drums and calls into the night created an instant atmosphere for both of us. After bumping into a lovely local lady called Annette, who like us knew there was a farm track leading to Stonehenge somewhere close by, we set out in hope. 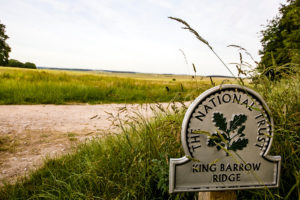 Annette disappeared into the darkness, only to reappear a few minutes later having found the location of the public footpath through the farmer’s fields. It would be a lie to say it was still pitch black now. It was 3am but the light in the sky was already brighter, that beautiful cobalt blue colour was staining the lower horizon and allowing us to see a little in front of our feet. 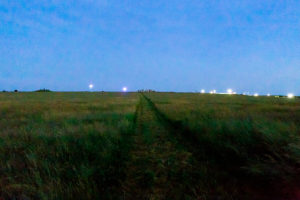 At the end of the footpath, the drumming became louder and as we turned the corner we had our first glimpse of Stonehenge in the distance over the rolling hills. What we saw was not actually Stonehenge itself. Instead, we were greeted by bright floodlights away in the distance. After some lamenting that it should be lit by the glow of beacon flames like in years past, we carried onwards towards the bright white glow and incessant drumming. 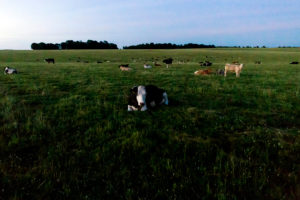 Cows and sheep lay asleep in the fields by our sides and to our left, we could make out the faint figures of a few other people making the same pilgrimage to the stones.

After half an hour we were walking up the pathway towards the stones, only to be greeted by people already leaving. It turns out these were visitors who had come for the night party and were too exhausted to stay up any longer. It would appear that the Stonehenge summer solstice has something for everyone. 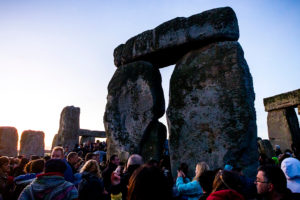 There was an estimated crowd of 10,000 to celebrate the Stonehenge summer solstice

Now that we were closer we could see the stones reaching into the sky. Rising high above the crowds of people swarming around them like ants. Long worn pathways led us to the official entrance. For some reason, I felt this would not exist, but in retrospect, it was obviously needed. Our bags were checked, and a scanner was waved around our bodies, much like an airport security gate.

Once inside we made our way past the hundred or so portaloos and six or seven food trucks towards the stones.  The music and drumming were louder now, and I could make out the odd chant and pan pipe. In the distance a bagpipe played beautifully, it’s harmony floating over the gathering congregation. 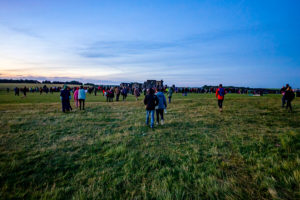 Arriving at the stones, the crowds began in earnest. We weaved our way through and soon found ourselves standing next to the stones themselves. The atmosphere here was one of expectation and calm. I would describe it as serene. Now, this could be because everyone was exhausted from the nights partying or it could be something else. Only you could decide for yourself. 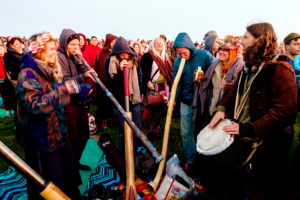 Up close and personal with the historic stones

Looking around the stone circle, the inside of which was teeming with people, it is easy to understand why this is a world heritage site and such a popular attraction in the UK. What was also amazing was that here we were standing right next to the stones themselves. Something that can only be done on this special day. 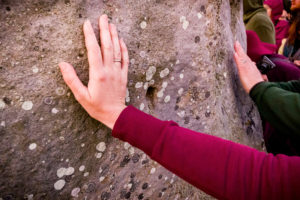 After a little bit of trepidation, we decided we would allow ourselves to touch the stones just this once. Nothing magical happened but their texture and colour are quite remarkable.

Something I also noticed was how when up close to the stones, they took on the colours in the sky. With their large sides, this makes perfect sense, but I am used to seeing the stones depicted a grey granite in pictures. To see them glow in various hues of purple, blue and orange as the sunrise progressed was magical. 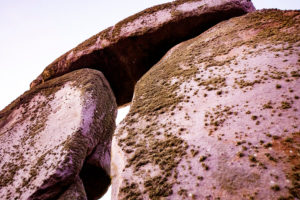 The sunrise at Stonehenge

Sunrise was nearing now, and I noticed small circles of people holding hands, eyes closed. The vast majority of people were looking out through the stones. Towards the fields, we had only an hour before just walked through. Most with phones held aloft filming and waiting for that first glimpse of sunlight. 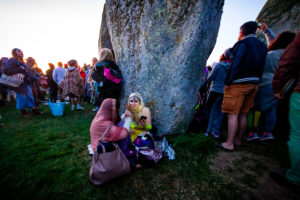 The wait for the first ray of sunshine took longer than I expected. We had looked up the sunrise time but now we were here and waiting, the sun did not actually appear at Stonehenge for a good 5-min after the scheduled time. Clearly, it had to make its way over the old forest first. 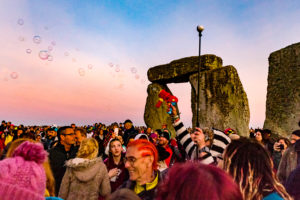 During the wait a reveller wandered around with a bubble gun, filling the air with bubbles. Catching the reflection of light and stones within their fragile world. And then finally, the first ray of sunshine broke through and a loud cheer arose from the crowd. 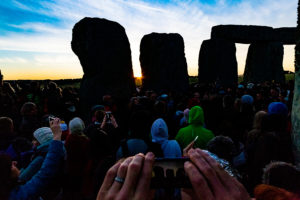 Phones were lifted even higher in the sky, the modern day offering to the Gods. It was harder to see now through the sea of arms all reaching for that perfect Instagram picture. Fortunately, I was right next to one of the stones and being tall I was able to see the sun break over the tops of the trees. Flooding the area with its warm orange glow. The atmosphere within the stones was one of excitement and happiness. 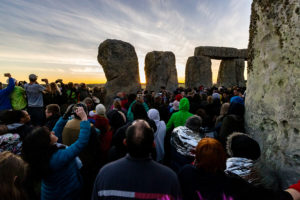 A beautiful gathering focussed on the magic of nature

This was a gathering of souls following traditions and beliefs. As well as people like myself and Lizzie who just wanted to experience the Stonehenge summer solstice. Looking around there were families, young couples, middle-aged and older generations all enjoying the spectacle.  If you have a pre-conceived idea of the place being filled with hippies and druids, you would be disappointed. Yes, they were here in numbers and help make the event as special as it is. But, the mix of different people all enjoying the magic of nature together, was enough to make you feel good about humanity itself. 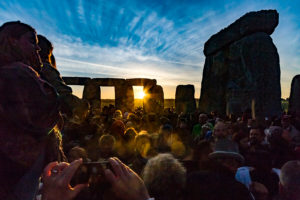 We wandered around the stones taking photographs as the sun slowly rose higher and the day began. Phones continue to be raised to the sky but now open palms were also pointed towards the warming sun. Trying to catch the warmth and glow of the first light on the summer solstice. We agreed that this was the nicest way to greet the new day. 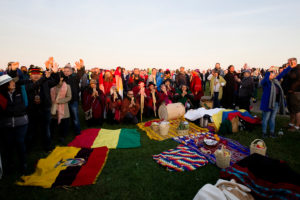 Visitors started to relax and pull away from the stones themselves, almost as though they were allowing them to breathe once more. The fields around the area started to fill with people sitting, relaxing and enjoying the view of the stones from further out. 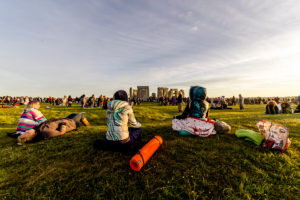 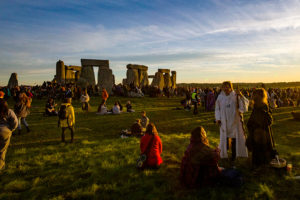 Leaving Stonehenge but having the memory forever

After a few hours, we decided we would take our leave. We would be ahead of the rush of commuters heading to work. Their day only just beginning but with us awake for so long already.  It is easy to see what they had missed in their slumber. Leaving Stonehenge behind we made the same walk back to the car, only this time in the daylight. Turning occasionally to look back at the stones and marvel at the majesty of them. 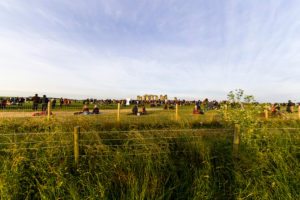 The music and drumming slowly faded as we disappeared into the forest and back to the real world. Both knowing we had witnessed something magical.

I first saw Stonehenge as a child

As a child, I used to go fishing with my Father, a lot. I’d look forward to the weekends, for I knew he would be free from the shackles of work and his smile would welcome me from my slumber. It was on one such weekend when he dragged me out of bed in the darkness and I helped load up the fishing gear, that we set off for a fishery in Salisbury. It was dark, the roads were empty, and we chatted and listened to music as the car rumbled over the worn out A303.

Gradually light came into the sky and something I’ll always remember happened as we came over the brow of a hill. The sun peaked over the trees and there was Stonehenge silhouetted before my eyes. My Father and I could only marvel at our timing. It was a major moment in my childhood that I always look back upon. I even wrote a poem called ‘The Fatherlands’ all about it. That poem was published years later in an anthology.

Now, much later on in my life, I had been gifted another beautiful experience by Stonehenge that I would always recall just as fondly.

Visiting Stonehenge is an incredible experience at any time of the year. We offer a wide range of tours that allow you to immerse yourself in their wonder. We offer unique special access tours as well as the sunrise tour itself. Stonehenge is a real wonder of the world and a must visit attraction of the UK. 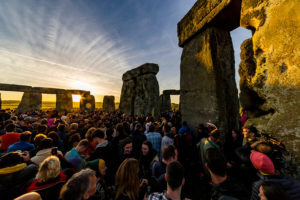 Please do share your experience of visiting Stonehenge with us at London Toolkit in the comments section.  We’d love to hear from you.  Taken a picture of Stonehenge? Use the hashtag #londontoolkit in your social media feed for a chance to be featured.

A prince, princess and a castle – The Royal Wedding

A visit to Warners Bros. latest and largest Harry Potter expansion, Gringotts Bank. I have…