If you are using the South Terminal at Gatwick, there is a free shuttle train between North and South terminal that runs every couple of minutes.


Premier Inn is the UK's largest budget hotel chain. Many people would consider their hotels to be of higher quality than most other chains in the market place in this sector.

Family Rooms, accommodating up to two children, are normally the same price as a room for two people.


There are several Premier Inn hotels at Gatwick Airport. The Premier Inn Gatwick North Terminal is the closest to the passenger terminals.

The Premier Inn London Gatwick (A23 Airport Way) is within sight of the North Terminal about 500m away and can be walked to as well, though most take the hotel bus for which there is a charge. Room rates here are normally cheaper than the Premier Inn North Terminal, walking you have top cross a busy road and use a narrow bumpy footpath. The hotel bus is not complementary.

The two other hotels that you can walk to North Terminal Gatwick from are the Sofitel Gatwick next door to the Premier Inn Gatwick North Terminal and the Hampton by Hilton Gatwick, both of which are full service luxury hotels which of course you pay a premium for.

Rooms: All of the rooms include a powerful shower and personal bathroom, Freeview TV with 80 channels, a work desk and chair, tea and coffee making facilities, blackout curtains and free Wi-Fi for the duration of your stay.

Internet: Wi-Fi is available in all areas and is free of charge.

Restaurant: Thyme is the in-house restaurant at Gatwick Airport North Terminal Premier Inn, with a new contemporary British menu and a varied international menu for lunch and evening dining. An all-you-can-eat breakfast buffet is available daily, and the bar offers beverages and snacks.

Located on site at Gatwick's North Terminal, this Premier Inn is a minute's walk from the main entrance and a transit train to the South Terminal runs every couple of minutes and is free.

There is little in the immediate vicinity other than the airport. There are frequent trains and local buses into the neighbouring towns of Redhill and Crawley where there are shops and other entertainment.

If you have time to kill trains go both into London and to the coast both about the same distance away. The Gatwick Express takes 30 minutes into London.

Detailed guide to staying in the airport complex at Gatwick 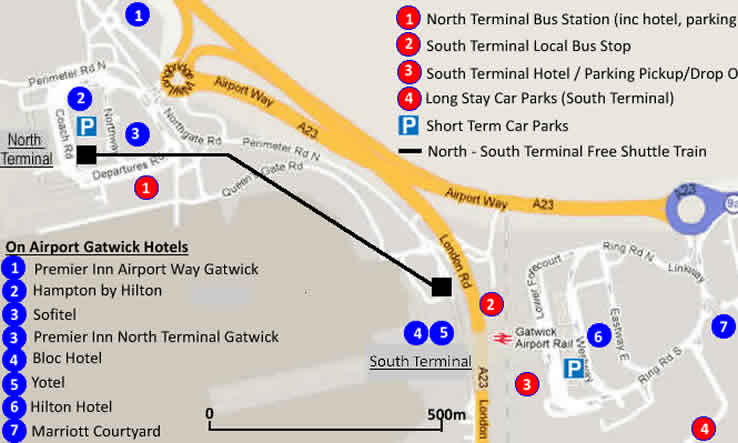