How to find the right Heathrow accommodation with parking


Heathrow hotel with car parking is available at most of Heathrow's mainstream hotels with competitive prices in all sectors from budget chain hotels to luxury 4 star hotels.

These hotel and parking packages at Heathrow can offer substantial savings to purchasing hotel and car parking separately, on a few occasions the package has been cheaper than just buying the long term car parking!


Parking at hotel or meet and greet at terminal?

A Heathrow hotel and long term car parking package at the hotel is normally the cheapest option, unless you are away for more than 15 days.


However two aspects to factor into your decision:

Meet and greet parking at Terminal

With meet and greet parking you drive yourself from the hotel to the passenger terminal where you are met by a car park representative. You hand over the car and walk into check-in.

On your return your car is at the passenger terminal and after collection you drive off very quickly with no bus transfer.

However two aspects to factor into your decision:

This type of parking deal you normally have to pay a price premium over parking at the hotel. You avoid the bus shuttle fees though and you can use this at all passenger terminals and from all hotels that provide this parking as an option.

With this type of parking option you may have to pay overnight parking fees at the hotel separately.

Importance of your passenger terminal to Heathrow hotel choice

If you are using the parking at hotel option, how you get to the passenger terminal makes a difference.

Hotels at Heathrow are not allowed to operate their own complementary transfer shuttle to and from the passenger terminals.

Instead the airport authority licences a Heathrow Hoppa Bus service.


The Hoppa Bus has a route network consisting of routes each covering three or four airport hotels, typically at 20-30 minute frequencies.

There is a full charge made for this, though its a flat same charge for every hotel no matter how far the transfer journey


The airport also subsidises public buses at Heathrow Airport. Many hotels, especially those on the Bath Road you can travel to your passenger terminal free of charge.

Until recently there was not enough land in the central area for hotels. However, in the summer of 2019, The Hilton Garden Inn London Heathrow Terminal 2 was opened - the first hotel connected to Terminal 2, so you can now walk from your hotel to the terminal.

In addition, in October 2019 the Aerotel T3 London Heathrow  also opened its doors. This hotel is located in Terminal 3 itself, offering less luxury but flexible stays with hourly rates.

Outside of these, you cannot walk out of the central area, you have to take a vehicle of some description to your hotel.

Most hotels at Heathrow have bus shuttles to Terminals 2 and 3, most of the exceptions are the hotels with Terminal 5 in their name or are attached to Terminals 4 or 5.

Heathrow Terminal 4 is isolated on its own on the south side of the airport far from other terminals. There is little in the area apart from airport businesses.

These hotels, some of which do hotel and parking deals in order of cost are are: Premier Inn Terminal 4, Holiday Inn Express Terminal 4, Crowne Plaza Terminal 4 and Hilton Terminal 4

Some hotels from the other side of the airport also run hotel shuttles to Terminal 4, but no more than about half of them.

Heathrow Terminal 5 is isolated on its own on the west side of the airport far from other terminals. There is one hotel connected to Terminal 5, the Sofitel Heathrow, one of the finest and most expensive hotels at Heathrow that offers car parking packages at the hotel.


There are many hotels with Terminal 5 in their name but none are near the passenger terminal, some indeed are several miles away!

However all these Terminal 5 hotels have transfer shuttles and nearly all the hotels on the north side of the airport serving terminals 2 and 3 also have shuttles to Terminal 5.

The lowest cost rates are precisely that, find the same deal cheaper and we will match the price by refunding the difference.

The product that you are comparing must be the same in every respect as that which you purchase, including cancellation and time of payment conditions. 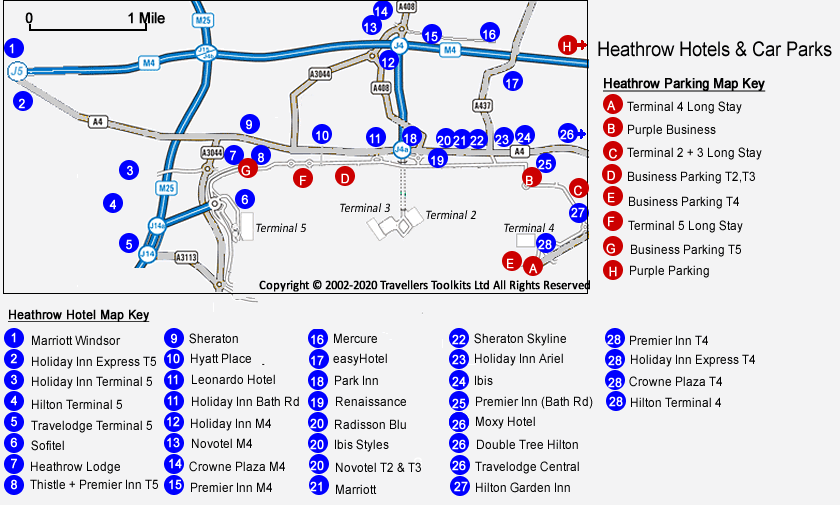