Luton Airport to London - the best way for you

Make an informed choice of transport between London & Luton Airport

It is normally quite a speedy process collecting luggage compared with the larger London airports. Rapid baggage claim and short walks when boarding your plane are therefore the norm and a pleasant contrast to London's other major airports.

The stops in London are also in all probability going to be much nearer your accommodation than the main alternative train service.

The main downside of the bus is that it is the slowest option (60 to 90 minutes) and with London traffic you are wise to factor in a comfortable contingency in case of traffic delays.

There is a choice of two different bus companies operating 3 services into London.

The fastest option between Luton Airport and London is the Luton airport train service.

With a journey time of 25 minutes and frequencies of up to 6 times an hour it's by far the fastest option and doesn't suffer unforeseen traffic congestion delays in London.

The downside is that Luton Parkway Station, is about a mile from Luton Airport.

A bus shuttle runs every 10 minutes for the 5 minute journey between Luton Parkway and the passenger terminal at Luton Airport.

The main station in London for trains is St Pancras, a major Underground hub and one of the best places in London to look for cheap accommodation.

In 2021 a new rail service was introduced, featuring fast trains between St Pancras and Luton Airport Parkway every 30 minutes. Called the Luton Airport Express it consists of a new all-electric fleet of trains.

The planned Luton Direct Air-Rail Transit Service (DART), which will link Luton Airport Parkway directly with the airport terminal is hoped to arrive in 2023.

The money no object, most convenient option is of course a taxi or private transport offering door to door transport.

Once you get 6 or 7 people the costs start to compare with public transport and for larger groups.

A chartered bus is going to be a compelling option offering both low cost and convenience.

We have a dedicated page for private cars, vans and coaches to/from Luton Airport.

Being 35 miles (55km) outside of London, a taxi or private car is not going to be cheap. For families or those with significant luggage or travelling at unsocial hours when public transport is not great in some areas, a car can make sense.

For small or large groups chartering buses can make a compelling choice with the promise of the lowest cost and customised transfer door to door at a time chosen by you. 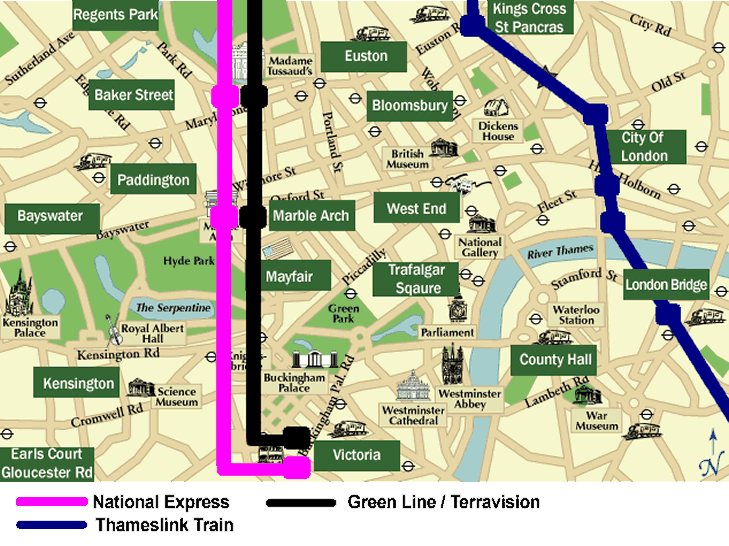