Luton Airport Hotels that you can walk to from the single airport passenger terminal now number five in total.

In keeping with the budget airline backbone of Luton Airport there is a bias to budget and mid-range hotels.

Luton Airport itself is only a couple of miles from Luton town centre which has another cluster of hotels around what is a regional shopping and entertainment centre.


To make an informed hotel choice at Luton Airport you should understand:

Walking to the on-airport hotels

Even with luggage it should take no more than 10 minutes and the pavement is fairly smooth and what kerbs there are to be negotiated have slopes, so it's pretty compatible with suitcases on wheels.

Come out of the passenger terminals and walk over to the right hand side of the bus station. There will almost certainly be National Express buses to London parked.

Go past the National Express London bus stops and continue to the roundabout. From here you should find waymarks to 'hotels'. Follow the exit road out of the airport through a short tunnel under the aircraft taxi way. On exiting the tunnel the Holiday Inn Express hotel is on the right hand side of the road at the top of the ramp. The Ibis and Holiday Inn hotels are just beyond.


Walk up to or out of the Holiday Inn Express hotel onto the approach road into the airport, (there is a short cut down some steps on the airport side of the hotel).

You will now come to a public bus stop with a remarkably similar view to the bottom image displayed here.

Follow the pavement through the tunnel and up into the terminal complex. When you come to a roundabout follow the signs that direct you along the left hand side of the bus station immediately in front of the airport terminal.

Pass the buses and you are at the airport terminal front door.

There is a good selection of hotels in Luton Town Centre just a couple of miles from the airport. There are public buses and a taxi should not cost more than £12, half that for the closest hotels.

The shopping area has all the mainstream UK chains, including Debenhams, Boots, TK Max, Marks and Spencer’s, WH Smith.

The whole area is surrounded by a multitude of restaurants, fast food and pubs that covers all budgets and tastes.

The Galaxy Centre adjacent to the shopping mall and part of the pedestrianised shopping area offers a wide range of entertainment facilities including an 11 screen cinema, The Whitehouse Lloyds No 1 bar and a selection of restaurants, all under one roof.

Perhaps the majority of motorists will be approaching Luton using the M1 motorway. There is a good choice of hotels near junctions 9,10 and 11 of the M1 motorway and Airparks, Luton airports main off airport car park is also close to junction 10.

With free parking and lower room rates (especially at weekends) these hotels close to the M1 make a natural choice for motorists. 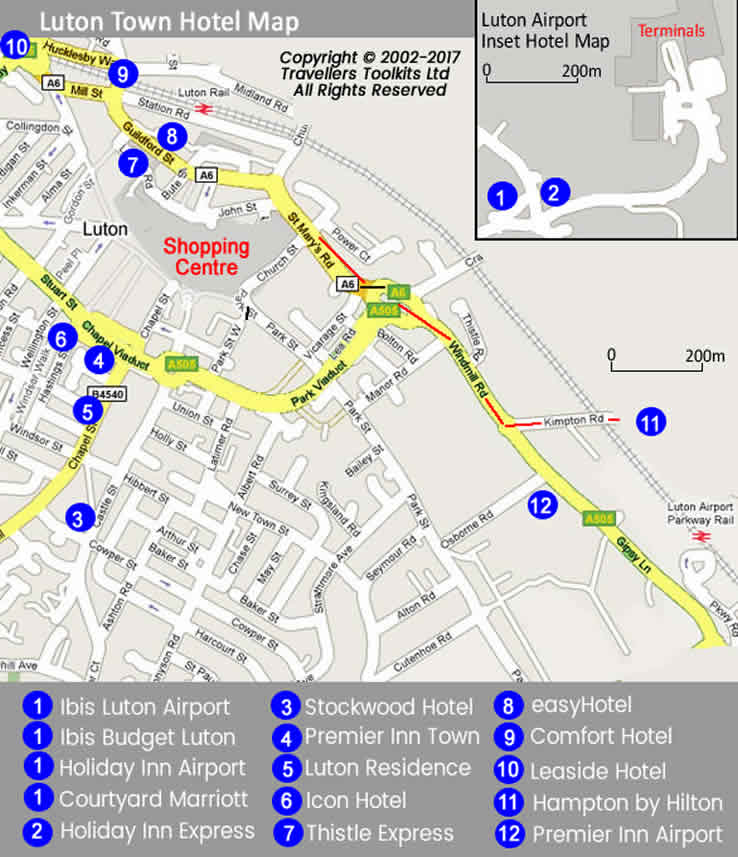