Park Plaza hotels in London offer upscale 4-star full-service hotels in some of the best London locations. Many enjoy iconic London views such as Big Ben, London Eye or Houses of Parliament.

All eight London Park Plaza hotels are in central locations consistent with the Park Plaza brand remit of being located in major city centres worldwide.

Park Plaza is part of the Radison hotel group which offers eight distinctive brands and over 1,400 hotels worldwide. Park Plaza offers trend-setting designs and aims to capture the energy and style of its individual location. Park Plaza in London is an upscale brand for business and leisure travellers.

The central location opposite the Houses of Parliament and the centre of UK government attract many on government business. As a result room rates at the five Park Plaza properties can be attractive when government closes down at the weekend and summer holidays. The Park Plaza Victoria is less than a mile away, next to Victoria Station. Victoria is a good location for leisure travellers with direct airport links to all of London's major airports. Victoria is also close to many of the main sights like Buckingham Palace and is the main starting point for many day tours.

The Park Plaza Sherlock Holmes is further north of the city centre, close to Baker Street, famous as the home of the detective from whom the hotel takes its name. This hotel is within easy walking distance of the famous Oxford Street, the busiest shopping street in London. 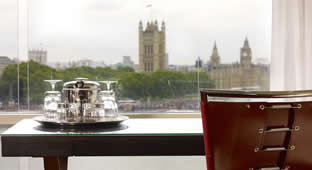 Set just on the south bank of the River Thames, this hotel has stunning views accross the river. With easy access into town, just a 7-min walk from the London Underground, the hotel is also near the Tate Britain gallery, Westminster, the London Eye, Houses of Parliament and Big Ben. There is an indoor pool, spa and fitness centre with weights, a pre-and post-workout stretching area and a range of TechnoGym weight resistance and cardiovascular machines. 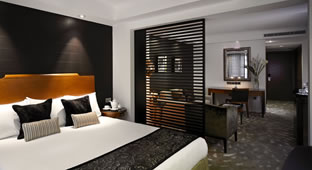 Just a 2-min walk away from Victoria rail station, one of London's major transport hubs. Spacious, air-conditioned rooms at Park Plaza Victoria have cable TV with on-demand movies. There is an on-site health club, featuring a sauna, a steam room and Italian style restaurant. Situated close to Westminster Abbey and Big Ben. 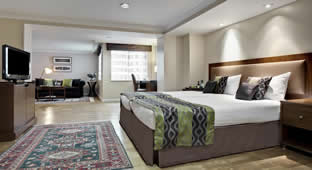 Just a few minutes' walk from Baker Street Underground, this is 18th century house is a full-service hotel offering wellness centre, concierge services, free Wi-Fi and Spa. You can eat at Sherlock's Grill and take cocktails at Sherlock's Lounge Bar by the fireplace. Oxford Street and Marylebone High Street are within walking distance. 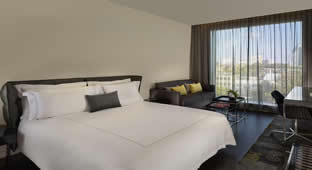 With an on-site sauna and heated indoor pool and bar/restaurant, this Park Plaza has plenty to keep you comfortable for your London stay. Just a short walk from Lambeth North underground station, from this hotel you can be at major attractions in minutes. Other major attractions are in walking distance; the London Eye, London Dungeons, Westminster Abbey and the Imperial War Museum. All rooms include signature beds, 48-inch smart LED TVs and Elemis bathroom amenities. 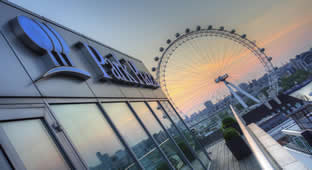 On London's South Bank, this is a modern and family-friendly hotel, just a few minutes’ walk from the River Thames and London Eye. Westminster and Waterloo stations are a 5-min walk away. There is a health club (with steam room, sauna and treatments), gym and a restaurant serving Italian cuisine. Rooms are spacious with plasma-screen TVs, large work desks, and microwaves. Guests can also make use of free Wi-Fi and 24-hour room service. Rooms on high floors have views of the City of London. 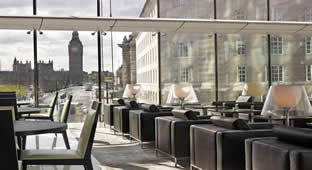 By the River Thames, overlooking Westminster Bridge and 500m from the Houses of Parliament, Big Ben. Air-conditioned rooms have modern luxuries, cable TV, desk, fridge and safe. Some rooms have river views. You can also relax in the hotel swimming pool, gym or book a spa treatment.

Park Plaza - Plaza on the River 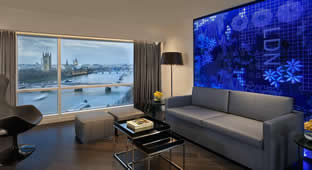 On the South Bank of the River Thames, this is a luxury aparthotel, many suites have superb views of London, whilst some have a modern fitted kitchen. Guests can order 24-hour room service or even request a private chef and butler. The Chino Latino Brasserie-Bar has an Asian theme, with seafood, sushi, etc. Rooms with kitchens are well-equipped for self-catering, also including a Nespresso coffee maker, a dishwasher and washer/dryer.