Radisson Blu hotels in London are all clustered (with the notable exception of the Radisson Blu Vanderbilt in Kensington) in and around the West End theatre district of London. The Radisson Blu Edwardian Hotels themselves range from bijou boutique to large scale luxury towards the top end of the 4-star hotel market.

The Radisson Blu Edwardian mission is to offer the highest level of service and hotel environment in an informal manner, without being stuffy.

They seem to be reaching this aim, often being voted the best hotel chain by consumer groups, above the likes of peers like Marriott in London. All the Radisson hotels offer complimentary Wi-Fi throughout and restaurants focus on seasonal British food.

Leicester Square at the heart of London's West End is synonymous with the theatre and cinema premières. It is always a hive of activity, a great place to people watch, normally with several street entertainers any time of the day. To the north west of Leicester Square are the main shopping areas of London, Regent Street, Oxford Street and Bond Street.

The Radisson Blu Edwardian Hampshire is a 5 star luxury hotel on a corner of Leicester Square. For position this is as good as it gets and you won't find many more comfortable hotels.

Very nearby along the Tottenham Court Road, the main district for electric goods is the Radisson Blu Edwardian Grafton, at the top end of the road next door to Warren Street Underground station.

The only Radisson Blu outside the central West End area is the Radisson Blu Edwardian Vanderbilt in Kensington. This offers comparatively economical rates and is very handy for travellers using Heathrow airport. Gloucester Road Underground nearly opposite the hotel has trains running every 5 minutes to Heathrow, taking just 40 minutes. 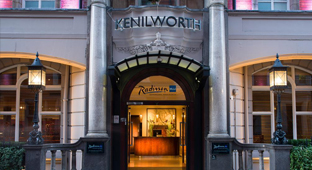 A sumptuous, elegant hotel decorated with quality fabrics, for a luxurious stay, just 100 yards from the British Museum. Rooms offer Egyptian cotton bed linen and down pillows, while bathrooms feature Italian marble with a power shower and complimentary toiletries. Some rooms offer views of the skyline. The restaurant serves top end steaks and lobster, and you can also enjoy cocktails and afternoon tea. A cooked breakfast in the morning completes your relaxing stay. 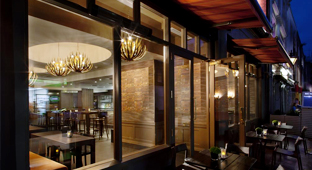 The Radisson Blu Edwardian, Grafton offers luxury, boutique accommodations right in London’s West End. Rooms are tastefully furnished with custom-made wall coverings and designer Italian chairs, plus a Sicilian marble bathroom. The Steak & Lobster restaurant offers rib-eye steaks and fresh whole half-shell lobsters. The bar has a large-screen TV showing Sky Sports and offers a range of beverages and light snacks. A buffet-style breakfast is available in the morning. There’s a compact fitness centre for you to enjoy. 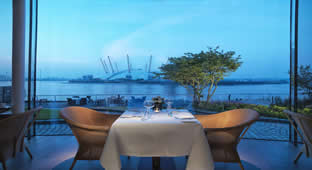 A very luxurious and comfortable hotel with elegant décor, right by the Thames, with a beautiful restaurant with floor-to-ceiling windows taking in the view. There is also a covered terrace for al fresco dining, and guests can make use of the East River Spa, with treatments and gym. Blackwall and East India DLR stations are both 10 minutes' walk away. Great breakfast can be included.

Just off Oxford Street and a 4-min walk to Marble Arch Tube Station and Hyde Park, this is an award-winning 4-star hotel decorated with fine artwork and designer furniture. The Steak & Lobster Marble Arch offers all day dining and is elegantly styled with leather chairs, while the bar also serves a selection of cocktails. The rooms have Samsung TVs offering up to 300 channels in multiple languages, designer furnishings, Egyptian cotton bed linen and a Sicilian marble bathroom. 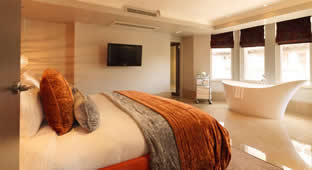 A luxury hotel located just a 1-min walk from the British Museum and less than a 5-minute walk from Oxford Street's shops. Contemporary, elegant rooms feature a flat-screen TV, Egyptian cotton bed linen and down pillows. Italian marble bathrooms have a power shower and complimentary toiletries. Some rooms offer views of the skyline. Guests can enjoy a cooked breakfast in the morning. 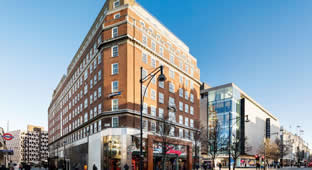 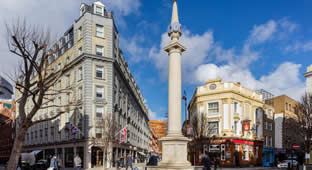 In the heart of Theatreland, within 10 minutes' walk of Soho, this hotel offers chic rooms with luxury décor and modern entertainment systems. All bedrooms feature crisp cotton bed linen, designer Italian chairs and Sicilian marble bathrooms. Guests have free use of a fitness room, and relaxing in-room spa treatments. The elegant restaurant features a fresh-food menu of Peruvian and Italian sharing plates, wine and cocktails. 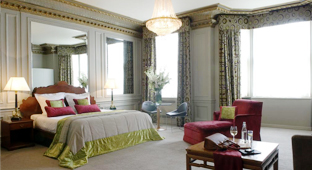 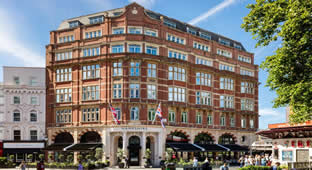 5-star luxury with impressive city views situated on Leicester Square. This hotel delivers charm, luxury and modern facilities in a central London location. Rooms are opulent and feature smart TVs, Egyptian cotton linen, work desks, mini-bar, safe and tea/coffee facilities. There are a 24-hr fitness room and a terrace to enjoy the views. The hotel is a 5-min walk from Covent Garden, Trafalgar Square, National Gallery and National Portrait Gallery.