What to expect when coming to Oxford to see the colleges

As the oldest university in the English-speaking world, Oxford is an historic institution.

There is no clear date of foundation, but teaching existed at Oxford in some form in 1096 and developed rapidly from 1167, when Henry II banned English students from attending the University of Paris.

If you wish to visit one of the colleges this is possible for a small admittance fee.

Also popular are walking tours of Oxford; the most popular being The University and City Tour.

In 1190 the arrival of Emo of Friesland, the first known overseas student, set in motion the University's tradition of international scholarly links.

Today thirty-eight Colleges, independent and self-governing form the core of the University, to which they are related in a federal system. There are over 20,000 students at Oxford, including around 11,000 undergraduates and 8,000 postgraduates. Over 50 per cent of undergraduates are studying for degrees in the humanities and social sciences, the rest in the medical, mathematical, physical and life sciences.

No college is tied to any subject. The student resides and studies at his/her own college. The tutorial is at the core of undergraduate teaching. Students meet regularly with their college tutor, either on a one-to-one basis or with one or two other students.

On average, an hour-long tutorial happens every week requiring a considerable number of hours preparatory work for each tutorial, including background reading, essay-writing and problem-solving. This may be supplemented by lectures within the University.

Most of the colleges are happy to admit visitors who wish to look around. However, most are only open in the afternoon for a few hours and many charge a small fee.

Christ Church, the largest college, is the most organised in this respect. The most interesting and oldest colleges are in the heart of the city.

Official guides are able to take small groups into colleges at times when the general public cannot enter. If you take a coach tour to Oxford, a walking tour will form the main part of your visit. What you see and where you go varies widely from tour to tour, even with the same company - so do read this part of the tour itinerary closely.

Walking tours of the city centre, conducted by the Guild of Guides, depart from the Oxford Information Centre and last between 1.5 and 2 hours.

This is the most popular introductory tour taken by the majority of visitors. The guide will take you through the heart of the historic city centre, illustrating the story of Oxford and it university. Describing the architecture and traditions of its most famous buildings and institutions.

The guide will provide a full briefing on the start of the College's and University life today. The University and City Tour normally visits inside at least one college and also covers the other main sights around the city centre.

The University and City Tour runs daily with frequencies reflecting the time of year. There is normally at least two tours daily with up to eight tours at peak times. The tourist office is easily found in Broad Street and is well signposted all over Oxford city centre. 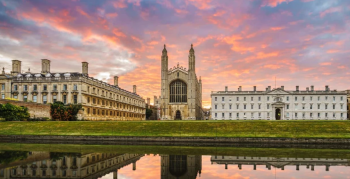 Full day tour of Oxford and Cambridge Universities from London